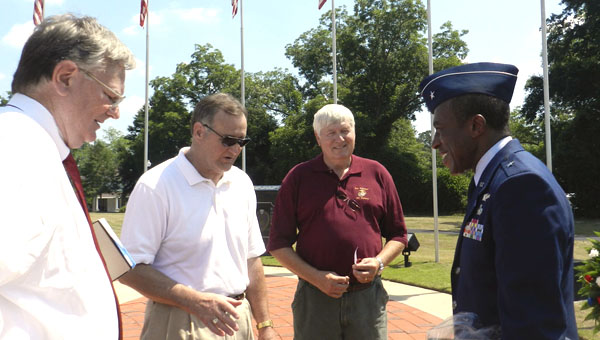 USAF Brig. Gen. (Ret.) Edward F. Crowell reminded area residents that on Memorial Day, Americans should be mindful not only of those who have served the country in the past, but those who serve today.

“Our national has changed significantly since the Twin towers were attacked on Sept. 11, 2001. Indeed the world has changed since then,” Crowell said.

“Even our Memorial day celebrations have acquired a deeper meaning. As a nation, we have now spent many months solemnly recollecting the lives of more than 3,000 American service members and civilians who died on Sept. 11 and the thousands more in combat. Now more than ever, we recognize what it means to honor the lives of those who were drafted and those who made the military a career.

“On this day a decade ago, our thoughts were focused on sacrifices made during previous wars … WWI and WWII, Korea and Vietnam. We were mindful, as well, of the daily peril of troops stationed around the world, and of those training here at home to keep us safe. Today our concerns are more immediate than reflective. Instead of focusing solely on past sacrifices, we also face the reality of on-going losses form our more than nine-year war on terrorism.

“Regrettably, the deaths of Sept. 11 have been followed by the deaths of soldiers sent abroad to prevent such other disasters,” he said. “As our previous commander-in chief, President Bush, explained in plain terms at the very beginning of this war, our primary defense is to take the fight right to the doorsteps of those who spread terror. Although there have been recent efforts to inflict domestic terror such as the abortive “underwear” and Times Square bombings, and tragically, the terrorist shooting at Ft. Hood, Texas. Notwithstanding these events, there have been no terrorist attacks on U.S. soil in the scale of Sept. 11.

Crowell said both those who served in the past and today support the principle of freedom.

“Our great nation was founded on the principle of freedom,” he said. “Freedom of the individual … freedom to speak … freedom to act, and freedom to worship so long as what is said or done does not jeopardize the rights of others to exercise that same freedom.

“Throughout the history of our proud nation, millions of Americans have made sacrifices for that principle. Americans are making that sacrifice today as we continue to wage the war on terrorism. They have given their fortunes, their time and, in many case, their lives for that precious freedom. The principle of freedom is still sound and still basic to our society.

Crowell said those who paid the price for freedom “came from the same fabric as those who now grow our crops, process our food, patrol our streets, protect our borders, many our mines and factories and teach our children,” he said. “They include professionals industrialists, farmers, shop-keepers, clerks, cabbies and truck drivers. … they are the soldiers, sailors, marines and Coast Guardsmen of our US. Armed Forces. Their combined military experiences, worldwide, took them to places like Belleau Wood, the Argonne, Omaha Beach, Salerno, Guadacanal, Tarawa, Pork Chop Hill, the Chosin Reservoir, the rice paddies and jungles of Vietnam and the Persian Gulf.

“We should never forget that they are the men and women who are in harm’s way to keep peace in Somalia, Rwanda, Haiti, Bosnia and Kosovo,” he said. “Today, they are the brave men and women combating terrorism at home and in far-away Iraq and Afghanistan and other trouble spots in the world.

“We like to think that we have learned a valuable lesson from our wartime experiences, but the lesson is not new,” he said. “It’s the same advice that Gen. George Washington gave to our country during the early years of our nation. He said, ‘If we desire peace … it must be known that we are at all times ready for war.’