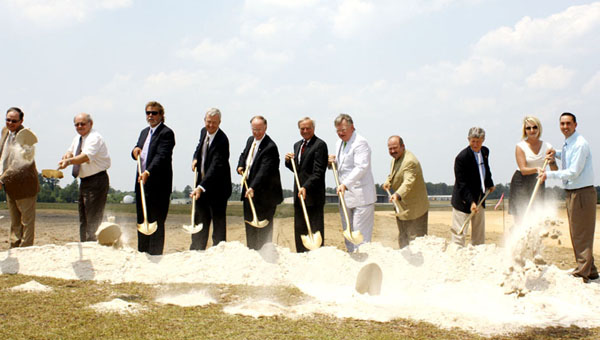 The “star of the South Alabama Regional Airport” – Vector Aerospace – held a groundbreaking ceremony Wednesday for a new facility that will bring an estimated 125 jobs to Covington County.

Vector, a Canadian-based helicopter repair company, currently employs 150 people. The new expansion will allow the company to nearly double the number of employees and the amount of workspace at the SARA.

“Vector is our star,” said Andalusia Mayor Earl Johnson. “We started the project two years ago, and this is a testament to what we can do when we band together.

“There is nothing better we can do than to give a person a job,” he said.

Hammett said the project was a “testament to the quality of work found in Covington County” – a statement Vector’s CEO Declan O’Shea echoed.

“We’re here for the long term,” O’Shea said. “Two weeks ago, we had more aircraft here than we’ve ever had. We have the people, the skills, the dedication and the willingness to be successful.

Bentley, who flew into the airport from Montgomery, said that “after such difficult times in the state,” it was nice to have good news to share.

“It really is a pleasure to announce new jobs for Alabama,” Bentley said. “They’re going to go a long way in helping the state reach full unemployment.”

Bentley said he and Hammett are planning to attend the Paris Air Show later this month in the hopes of drawing companies like Vector to Alabama.

Construction completion is expected by late summer or early fall.