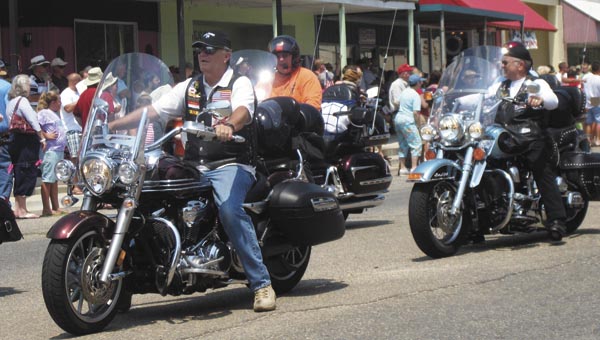 Florala Chief Sonny Bedsole said the use of golf carts and ATVs will be strictly prohibited during this year’s June 24th celebration.

This year’s Masonic Celebration will be held the week of June 20-25. In years past, residents have used the motorized vehicles to navigate crowded city streets during the Saturday Masonic Celebration; however, that will now change, Bedsole said.

“Last year, we had a hit and run with a man on a four-wheeler who hit a truck and fled,” Bedsole said. “Then, we had two near collisions between cars and golf carts. It’s too dangerous to be out on those things. Someone could get seriously hurt.”

Bedsole said the practice of operating golf carts and ATVs on city streets and highways is illegal.

“But, if someone wants to use one in the parade, that’s fine,” he said. “But riding around on the streets throughout the day, it won’t be permitted. If you’re caught, citations will be used.”

The annual Masonic Celebration is the oldest consecutive running celebration in the U.S. Throughout the week, a children’s parade, beauty pageants and musical singings are scheduled, as well as a nightly carnival. Thousands usually converge on Florala at the end of the weeklong festivities. This year, that day falls on Sat., June 25. Scheduled events include a parade, which begins downhill at 11 a.m., and car show and arts and crafts on the shores of Lake Jackson.

Those wishing to rent booth space at the lake should contact the Florala High School band boosters at 334-858-6925.

Vendors will be required to have a city business license by Thurs., June 23. Licenses may be purchased from the city clerk at city hall, located on Wall Avenue. Violations will be issued to those vendors operating without a license.

Gov. Robert Bentley on Tuesday signed into law a bill that would set a two-year moratorium on new large landfills... read more