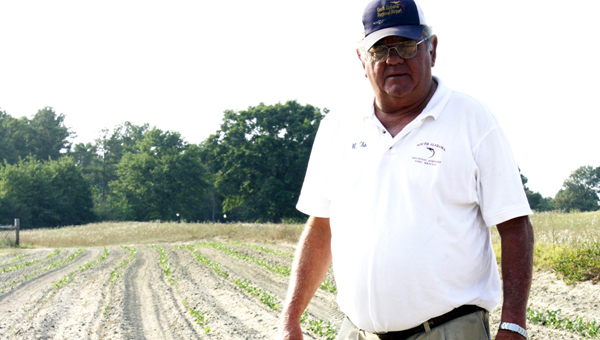 Opp farmer Michael Ellis stands in a dry, planted field of peas on Monday. Ellis has been forced to water his corn and okra from his private pond.

Covington County’s farmers are in dire straits as the drought takes a heavy toll on hay and crop production.

Doyle Barnes of the Farm Service Agency said it’s an “awful situation” for the farmers and their nearly 30,000 acres of pasture in the county.

With-out rain, hay crops are virtually non-exsistent, and farmers are beginning to use the hay stockpiled for the winter to feed cows now.

“If we run out of hay that we produce this year, there’s not a lot to be purchased,” he said. “We’ve never been in that situation. We try to plant as much winter grass as we can, but we don’t typically do that until December.

“We’ve got to hope that we get some rain soon,” he said. “If not, farmers may start liquidating their cattle, which happens every year, but this may be a big year for that.”

Opp farmer Michael Ellis said this summer’s drought is “as dry as I’ve seen it, except in the early 80s.”

Ellis, who plants row crops and has 50 head of cattle, said he’s been steadily watching his, and others’, hay supplies dwindle.

Ellis said some farmers have never fed hay in the summer because they traditionally have enough green grass for cows to eat.

However, no rainfall means no grass growth, he said.

“It’s bad,” he said. “I stopped giving (the cows) hay for a little while after winter, but I had to start back.”

Ellis said farmers have already missed on cutting of hay, as well.

“It’s a critical situation,” he said. “I normally get about 35 bales of hay off the small field, but we haven’t done that this year.”

Barnes said because of the drought, livestock producers are now using the season’s first cutting of hay to feed their cattle.

Ellis, as well as other area farmers, has begun to use chicken litter to cut down on the amount of hay they have to use.

Farmers are also using corn to feed cattle; however, that’s not a practice that is recommended, said Auburn Extension agent Chuck Simon.

“There’s a potential for nitrate poisoning, because when a cow eats the corn with too much nitrate, and it overwhelms them, and it can kill them,” he said.

Simon recommends that the corn be tested prior to feeding it to the herd.

Livestock producers aren’t the only ones experiencing trying times. Row crop farmers are also watching their crops dry up because of the lack of rain, Barnes said.

“Corn is being severely affected,” Barnes said. “Some of the corn is a 100 percent loss.”

Ellis, who also has corn, has resorted to using water from his pond to irrigate his corn crop. But that’s a practice that can’t continue for much longer with the decrease in water levels.

Ellis said his pond is down about 2 feet from its normal level.

“I’m having to water the corn and okra in the late afternoon and run it until 9 p.m.,” he said. “I’ve watered before, but not this early by any means.”

“I talked to a friend who said it’s as dry as he’s seen it since 1954,” Ellis said. “People are beginning to hurt. We better get rain in a hurry, and I ain’t talking about in two or three weeks. I mean this week.”

When the U.S. Census Bureau completed its assessment of Andalusia last year, it estimated there were 400 to 600 unoccupied... read more