‘07 cattle drive was one for history books 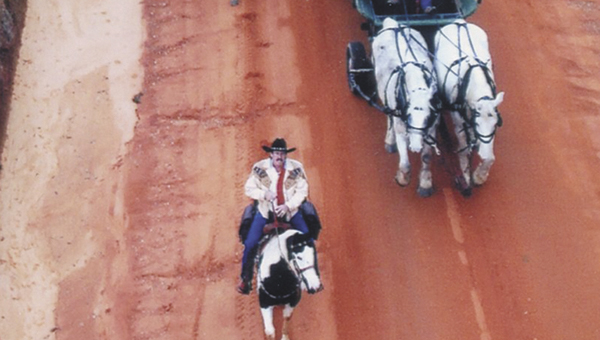 Everybody has a Buddy Harper story.

One that daughter Marrianne DuBose loves to tell is of one about Harper’s more famous ventures – the 2007 cattle drive from Andalusia to Montgomery.

“Dad loved the PRCA (Professional Cowboy Association) rodeo that came to Montgomery every year,” DuBose said. “That and the Montgomery livestock show, too. Other towns did trail rides, but no one from South Alabama did. His idea was to go to Montgomery.”

It took months to plan, she said. Harper carefully planned every detail from campsites to what to stock in the food wagon.

“He thought it would be fun to drive 66 longhorn steers from Andalusia to the door of the Capitol,” she said.

His brother Johnny said the trip was their boyhood “dream.”

“We’d done lots of rodeos,” he said. “We’d seen them drive cows in Ft. Worth. Everybody here said, ‘No way. Can’t be done.’ Buddy was never one to take no for an answer. The biggest obstacle we had to convince the mayor and police chief we could do it, but we did it.”

It took four months to “train” the herd, the two said.

“Every Sunday after church, we’d come in, change clothes and run to the barn just so we could teach those cows not to stampede,” DuBose said.

For the most part, the training paid off – except for that night in Highland Home, the two said.

“Now mind you, we’d been working on keeping the herd in line and calm,” Johnny said. “We’d run them down Moore Road, down to Don Bullard’s and back – that’s about 10 miles – to get them ready so they wouldn’t kill anyone.

“But that night in Highland Home, we’d lost five head in the woods,” he said. “So, Steve Lawson, the game warden, he was riding with us, he decided to take out some panels and corral the herd. Best we can figure is one of those panels made some noise and spooked ‘em.

“It was on then – a stampede – just like in the movies,” he said. “Horses jumped the fence. Cows were everywhere. It was a disaster. We all ran out of the campers to try and keep them from hitting (U.S. Hwy.) 331.”

DuBose said it was then she saw one of the hired cowboys jump into a dually pickup with a 38-foot stock trailer, throw it into reverse and do some of the best driving she’d ever seen.

“You would have thought he was going to jackknife and kill himself,” she said. “He didn’t. Sixty miles per hour, backwards through that pasture. It was amazing.”

And Buddy loved it, the two said.

“If it was real easy, he didn’t want to have a part of it,” DuBose said. “That’s just the way he was. I know it sounds crazy, but he loved it.”

As for the five missing cows, they were never found, they said.

It happens every day – older Americans are abused, neglected and exploited, officials said. Today, people from around the country... read more