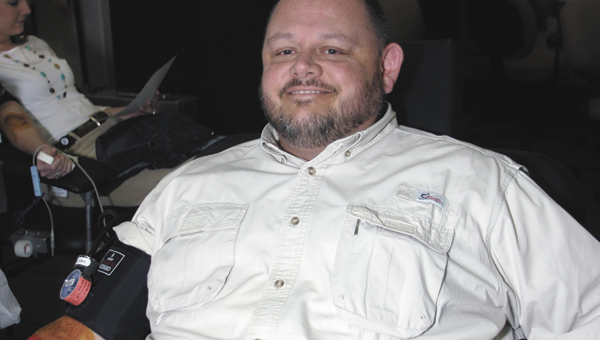 The lack of participation at local Red Cross blood drives could force the national non-profit to reduce the number of blood drives here by half.

Meg-an Jeff-erson, blood services account manager for the RC Alabama and Gulf Coast region, said there are 47 active accounts in Covington County, and less than half of those are successful drives that produce more than 21 units each time.

She said due to rising operational costs, the Red Cross may soon reduce the number of drives that don’t meet production goals. In a typical month, the Red Cross holds at least three drives in the county, she said.

“(The Red Cross has) also just suffered another layoff of about 500 employees because costs have gone up more than 4 percent,” she said. “Soon, we will only travel so far a set number of times during the month, and they will begin reducing drives that produce less than 20, which are a majority of the drives in Southeast Alabama. We need the public’s help to prevent further ramifications.”

A case in point is today’s blood drive at Andalusia Regional Hospital, where at least 17 donors are needed to bring the Red Cross back for future drives at the location, she said.

“(The Red Cross is) the primary supplier to (ARH), as well as Florala Memorial,” Jefferson said. “Neither (drive) collects more than 10 units of blood.”

Because of the low participation it is not cost productive to hold the drives, she said.

“Although the blood is free, it still costs us to get it,” she said. “Each goal determines how many staff we send, which is one person per seven donors. The line staff is paid for loading, travel, actual drive time, travel back and unloading. Gas prices are extremely high especially when we have to use the bloodmobile.”

She said cost involves everything the non-profit has to spend to collect the blood and get it to each patient, including processing and other expenses.

“If we set out to collect 50 units, but only collect 25, we have spent the money for 50 and have to get that back as a business,” she said. “We sell the blood to the hospital for only what we spent to get it. Hospitals then sell the blood for whatever they like.”

ARH CEO Mark Dooley said the hospital has absolutely no financial interest or gain in the drives themselves, but encourages participation from its employees.

He said he was “disappointed” by the news this could be the last drive at ARH and hopes to discuss ways of keeping the drives going with Red Cross officials.

“Patients are counting on us heroes,” Jefferson said. “So, please donate.”

Donors must be at least 17 years old, healthy and weight at least 110 pounds.

Florala to redistrict before election

The results of the 2010 Census show that Florala must redistrict prior to the next municipal election. City council members... read more