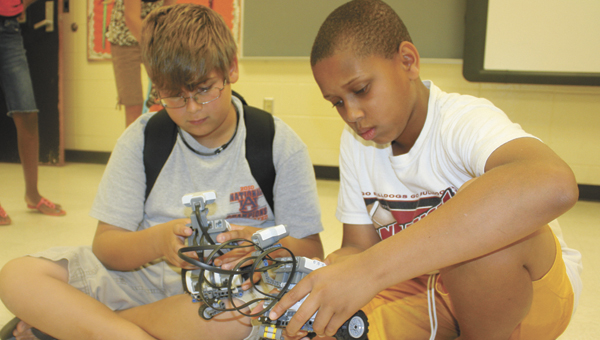 Dylan Scruggs and R.J. Drish work on finalizing the robots they made at RLES this week. | Kendra Bolling/Star-News

Thanks to the school’s 21st Century Learning Grant, a grant program designed to enrich students though extracurricular activities that complement their regular academic programs, students had the opportunity to build robots from scratch.

There have been approximately 60 children participating in the two-week summer enrichment program.

“We started with the body,” said Dylan Scruggs. “Then, we attached the legs.”

After that, R.J. Drish said they had to connect the USB cords to make the robot work.

“We also had to program the software,” he said. “There’s a lot of rewiring that goes into it, too. We will have to change the battery soon, too.”

Students said they were excited because it was a chance for them to understand how to “put things together.”

“I learned how to build,” said Codi Howell. “It was great.”

Scruggs and Drish said the project showed them just how important teamwork is.

“I learned that you have to have team,” Scruggs said. “If you don’t have teamwork, your project can’t get accomplished.”

“It’s very important,” Drish said. “We wouldn’t have finished our project, if we hadn’t worked together.”

Since the students didn’t have written instructions to go by, they had to rely on pictures to show them how to make the robots operational.

“It was a lot of trial and error, but we did it,” said Bailey Blackburn.

Scruggs credited Grimes for their success.

“She’s the best teacher ever,” he said.

Grimes gave all the credit to RLES principal Rodney Drish.

“He found this activity,” she said. “We’re going to add it into our curriculum during the school year. It helps us meet our technology and science course of standards.”

Additionally, students enhanced their reading, math and arts and crafts skills during the two weeks, she said.

Covington County’s jobless rate rose slightly in May, but it was still almost a full point behind the state average.... read more