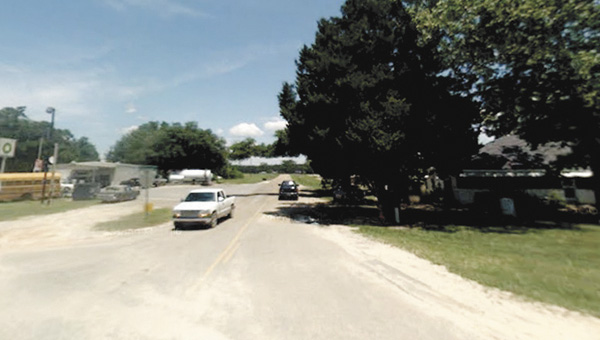 Shown is the intersection of Hwy 123 and Cty Rd. 4 in Wing, where three sisters lost their lives Tuesday night. | Google graphic

Wing residents believe a caution light at the intersection of Ala. Hwy. 137 and County Road 4 may have prevented Tuesday night’s fatal accident that killed three sisters from Baker, Fla., and critically injured their grandmother.

Now, the group will hold a meeting June 28 for public input on how to take the project to the state transportation department.

Jay Spicer, Wing Volunteer Fire Department assistant chief, was one of many emergency personnel that responded to the accident, where an 18-year-old Birmingham woman allegedly ran the stop sign at the intersection and struck the Toyota carrying 8-year-old twin, Danielle Pippins and Janniell Pippins and Savannah Pippins, 11, and their grandmother, 45-year-old Dianne Poire.

Spicer said the intersection has been problematic, the cause of an estimated eight fatal wrecks in the last 20 years.

“That intersection is so wide, that if you miss the ‘Stop Ahead’ sign, you’re right on top of the intersection before you see the sign,” he said. “If you’re not familiar with the road. Well, you’ve seen what can happen.

“There’s between 40 to 50 feet where the road widens until you can see the stop sign,” he said. “I don’t know how fast (the girls) were running, but by the time you see (the stop sign) and slam on brakes, there’s not enough time to stop, even if going 45, which is the limit. You can’t come to a complete stop.”

Spicer said he and other residents believe that a caution light could prevent future accidents.

“We think a good number of accidents could’ve been prevented if there was a light there,” he said. “About 20 or 25 years ago, we got up a petition to put one up, but the transportation people said there wasn’t enough traffic on 137.

Spicer said a public input meeting is set for Tues., June 28, at 7 p.m., at the fire department.

He hopes representatives from the Alabama Department of Transportation attend, he said.

Tony Harris, ALDOT spokesman, said the department is actually one step ahead in the process of determining if additional traffic precautions are needed at the intersection.

“Our daily reporting from the Troopers on Wednesday indicated this crash had happened the day before, and we immediately began working with Troopers to share information about their investigation as part of a safety review of that location, so we’re ahead of the community’s request.”

Harris said the study will take several weeks to complete.

“We‘ll examine traffic volume and history, as well as crash history for the location, in terms of frequency and severity, and from all of that, some determination can be made if any changes are needed in terms of traffic control at the intersection,” he said.

“What I hear is there is an idea a caution light is needed there,” he said.

Harris said officials would have to take the results of the study and see how they compare to the federal criteria to see if a light would be needed.

Harris said if the criteria concludes that a light is warranted, then DOT will work with local officials on the details for installing the caution light.

“Our review will also consider other safety measures such as additional warning signage, rumble stripes and other improvements that might be possible at the site,” he said.

Wofford: Use rainfall to water plants

Earlier this week, the City of Andalusia instituted a voluntary odd/even outdoor watering system to conserve water in this summer’s... read more