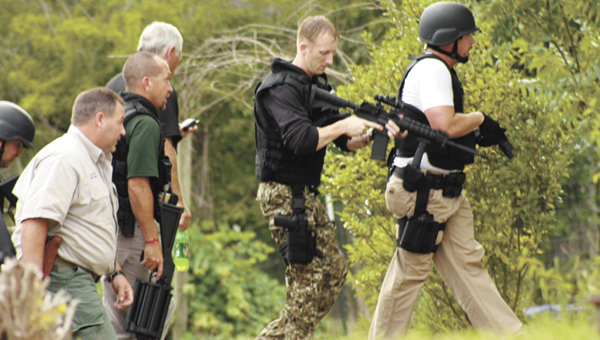 An Andalusia man is behind bars after firing at least three shots at law enforcement officials during a three-hour standoff Tuesday afternoon.

Andalusia Police Department officers responded around 4 p.m. to an Arnold Street residence after there was a report of shots fired.

Law enforcement officials attempted to negotiate with 45-year-old John Paul Williams, who was threatening to kill himself, for nearly 3 hours, including having Williams’ daughter talk to him.

Covington County’s incident response team was called in to use tactical measures such as tear gas to coerce Williams out of the residence.

When IRT members fired shots of tear gas, Williams retaliated by firing shots back at the officers.

When shots were fired, family members and the media – a block away – were advised to hit the ground.

APD blocked entry on both ends of Arnold Street and closed a portion of Dixon Street during the standoff.

Andalusia Police Chief Wilbur Williams, no relation to the suspect, said this was the third altercation with Paul Williams,

“It was a successful conclusion to an unfortunate situation,” Wilbur Williams said. “This individual has had at least three – this is his third altercation with law enforcement with such a situation where we’ve had to call in the response team.”

Williams said he would consult with District Attorney Walt Merrell to determine exactly what the charges should be.

The Star-News will update when more information becomes available.

The Florala Airport Authority took steps Tuesday that will allow it to pursue Federal Aviation Administration monies to improve the... read more