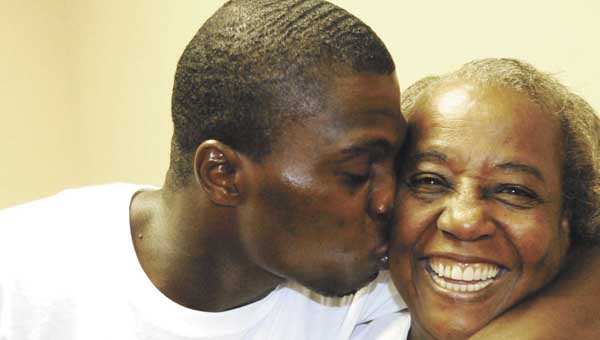 Lathan Word kisses his grandmother, Retha Word, on Thursday afternoon. Word was recently released from a Georgia prison, where he had been serving time for armed robbery, which he didn’t commit. Word was granted a retril and found not guilty. | Andrew Garner/Star-News

For nearly 12 years, Andalusia native Lathan Word has been in prison for an armed robbery in Columbus, Ga., that he did not commit.

Wood, now 29, was 17 when he left Andalusia to live with his mother in Columbus, Ga., to finish his senior year of high school. Reared by his grandmother, Retha, Word said the only brush with the law he’d had was when he got “busted for drinking at Straughn High School.” He said he quickly saw the error of his ways, and soon after, enlisted in the U.S. Marine Corps.

“My uncle was in the military, my cousins, too,” he said. “I spent some time with my dad in West Palm Beach and joined the ROTC there. One of the instructors became my mentor, who was a Marine. He took me to take my ASVAB (military aptitude test). I scored real high. I came back and told my grandma I joined the Marines, and she was very excited.”

With a life plan in mind, Word said he decided to spend his last year of high school with his mother in Georgia.

“It was the worst decision I ever made,” he said. “Boom. One false move and my whole world changed.”

On Sept. 13, 1999, Word was at a friend’s house in the Columbus neighborhood. At the same time, someone with a bag over their head stormed into Jennie & Joe’s Curb Market brandishing a semi-automatic handgun and robbed store employee Contresstis Tolbert of $300.

Tolbert identified that “someone” as Word.

“I even had an alibi,” Wood said. “At first, (Tolbert) said it was me. Then, he changed his story to say that he couldn’t be sure. Then, he changed it back. I think he used me as a scapegoat because he knew I was going into the military. He was scared, and he gave them my name.

“When it happened, I was 18 by all of 11 days,” he said. “I’d heard the police were looking for me, so I turned myself in. I thought I was doing the right thing because I didn’t commit any armed robbery.”

Wood said before he knew it, he was in front of a 12-person jury on trial for armed robbery, despite the lack of evidence. And based on Tolbert’s testimony, he was convicted and sentenced to 15 years in prison without the possibility of parole.

It was six days before he was to leave for boot camp on Parris Island, S.C., he said.

Throughout the years, Wood said he tried to appeal, but he was “lost in the system.”

“I went from high school to being in prison,” he said. “I didn’t know what to do. I didn’t know the law. Finally, I got tired of waiting, and I went to studying.

“I learned what I needed to get back into court,” he said. “I got numerous denials for a new trial, but in March, it happened. I got my shot.”

It was nearly three months ago that the Georgia Court of Appeals reversed Word’s conviction on the grounds of ineffective assistance of counsel. The basis for their decision – Word’s defense attorney at trial failed to object when a prosecutor improperly asked a police officer whether he believed Tolbert’s testimony.

Because the evidence against Word was so thin, the appellate court held that the officer’s inadmissible comments were prejudicial and may have impacted the jury’s verdict.

He had two options, plea or a new trial.

“I was innocent,” he said. “They were wrong. They had no evidence. There was no way I was going to plea.”

But what about Tolbert, the victim and only witness to the 1999 crime, one might ask.

“Well, he’d been convicted of murder and armed robbery,” Word said. “He’d been sentenced to multiple life sentences, and when we got to trial, he said was tired of lying.”

That afternoon, Word walked out of the Muscogee County, Ga., county jail a free man, he said.

“Prison life is unexplainable to people who haven’t lived it,” he said. “You can either shed light or cast a shadow when you’re in there. You can choose to be good or bad. I chose the good way. I got my education; stayed out of trouble; put my head in a law book.

“On the other side, I lost my family,” he said. “My dad died. My grandfather died. All I have left is my grandmother and aunt. But, I feel good about myself. I did the impossible. I got out.”

He said there were no apologies waiting for him when he got out of jail – not from Tolbert, jail officials or the State of Georgia.

However, there was an array of good Southern soul food and his family waiting for him at a Golden Corral restaurant.

“That’s all I could think about – getting something to eat – when they said I was free,” he said.

Now, Word is making plans for the future. He hopes to find a job here in Andalusia so he can remain close to his grandmother. Being a lawyer isn’t in his future, he said.

“I’ve had enough of the law. I think I might publish a book,” he said. “I’d love to do some motivational speaking – talk to the younger crowd and tell them that prison isn’t as cool as they think it is.

“But No. 1 on my list is taking care of my grandmother,” he said. “She and my aunt, they’re the only family I have left.”

Retha Lee Word said she positively, without a doubt, believed in her grandson’s innocence. Lathan Word was convicted in 2000... read more