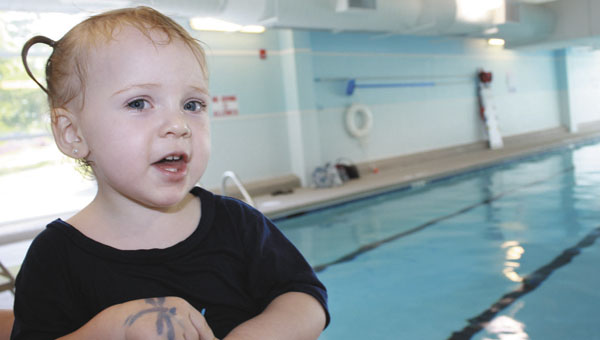 Kaidi Ramer, 18-month-old daughter of Gregg and Meredith Ramer, has been training with the Infant Swimming Resource, which teaches young children self rescue techniques. | Stephanie Nelson/Star-News

Gregg and Meredith Ramer have lived through every parent’s worst fear, twice. Their 2-year-old twins, Kenadi and Brayden, drowned July 29, 2009, when they fell into a family pool in Opp.

Now, they’re working to make sure they don’t experience the same tragedy with their 18-month-old daughter Kaidi.

To do that, the couple has brought a program called ISR or Infant Swimming Resource to Opp.

“I lost my twins to drowning and am doing all I can to make sure that no other parent experiences what we experienced and still experience with their loss,” Meredith said.

The ISR program teaches children from 6 months to 6 years “self rescue” swimming lessons by teaching children to swim with their heads down; rolling onto their backs to float, rest and breathe; and then resume swimming until they reach the side of the pool, where they can crawl out or float until they can be rescued.

This is Kaidi’s second session in the class, which is held at the Opp Mizell Wellness Center. There are 12 children enrolled.

Kaidi’s first session began in Enterprise at 7 months of age, when shortly after her birth, Meredith said she recalled seeing a video about how infants as young as six months can be taught to swim.

“It was actually right before the twins died,” Meredith said of watching the video. “And when Kaidi was born, I decided that was something we were going to do. That was not going to happen to us again.”

She said a family friend got her in contact with Kim Magella, a certified ISR instructor, whose sister lived in Enterprise. Magella had traveled to the area from Ohio during the summer months to give ISR instruction. Immediately, Meredith said, she contacted her about getting Kaidi into the class.

“The first day, Kaidi learned to float,” said dad Gregg. “She was 7-months-old. It was pretty amazing. Now, she can swim.”

The classes generally last for six weeks, he said.

Magella said her children took the class some 15 years ago. Since then, she’s been instructing others how to avoid drowning.

“All children can be taught to swim,” she said. “It’s a motor skill, just like crawling or walking.

“Drowning is the silent killer, because once a child falls in, you can’t hear them scream,” she said. “This program teaches them to get to the surface so they can call for help. It teaches them what to do and how not to panic.”

The ISR program is credited with saving some 800 lives during its 40-year history.

“As a parent, it gives you a peace of mind,” Gregg said of the instruction. “Of course, you keep (your children) away from the pool, but if something happens and they somehow fall in, they have the skills to save themselves.

As for Kaidi, she loves her time in the water. It’s apparent from the smiles as she swims from Magella to Magella’s neice, Sarah Tuttle, a newly-certified ISR instructor.

This session of ISR classes are nearly over; however, a second six-week session is scheduled to begin July 18, and will be held from 3:30 p.m. to 5:30 p.m., Mondays through Fridays, with Tuttle as the instructor.

“At first, our family couldn’t come to the pool and watch Kaidi in the water,” Meredith said. “It was too hard. They couldn’t handle it. And as I had to watch her struggle in the water, it was difficult, but I knew it was worth it. It could save her life.”

Editor’s note: To contact ISR instructor Sarah Tuttle directly about upcoming lessons, call her at 334-406-0856 and or email her at stuttleinalabama@gmail.com.