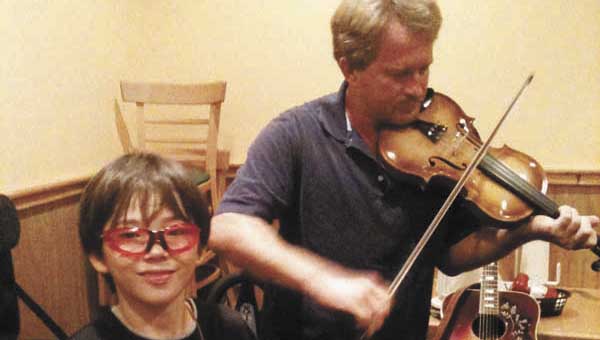 “Strike up the band” is not something one normally hears at a sports bar and grille, but that’s exactly what happened at Beef O’Brady’s Monday night as the local establishment hosted open mic night.

It was the second instance that allowed local musicians to showcase their talents, and if you think Samuel Moore, 8, looks more like a kid who’d enjoy video games over bluegrass music, you’d be wrong.

He’s been playing the guitar since he was 4.

“It’s funny,” Samuel said. “I love to play music. I love the guitar, the mandolin, and I got a fiddle. You should hear it.”

Moore, his father Richard, and grandmother Ruth were among the entertainers performing. At 7:30 p.m., the group began bringing in guitars, mandolins and fiddles. To say that diners were curious as to what was happening was an understatement.

“My boss is a real good friend of the owner,” Richard said as the group unpacked. “When he said he was thinking of doing an open mic night, my boss said ‘I got the guy for you.’ So, here I am and here they are.”

One had to only read Gene Griggs’ shirt and Bobby Jackson’s belt buckle to know their preferred style of music.

“I ‘love bluegrass’ kind of says it all,” the men agreed. Both have been playing for years, they said.

When Richard called them to perform with him, it didn’t take much to get them to show up.

“All I had to do was tell them how I didn’t want to perform alone,” Richard said. “These two don’t really need an excuse to play good music.”

Which is exactly the kind of venue, Beef’s hopes to promote.

Area musical talents are invited each Monday at 8 p.m. to perform. Sign up begins at 7 p.m. and there is no age limit.

There is no specific music style set, either.

“Bluegrass, country, bluegrass, Southern gospel, soft rock, you name it,” Richard said. “All you have to do is come perform.”

DOT: No caution light for Wing