Snake bites in pets currently on the rise 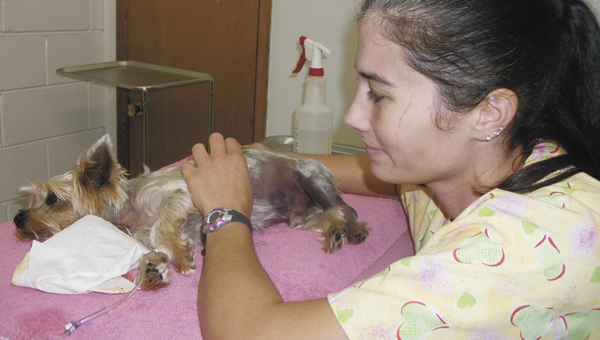 One Opp veterinarian said Thursday the number of rattlesnake bites to pets is on the rise.

Dr. Faith Drumheller, owner of the Opp Veterinary Hospital, said her office saw three that had been snake bitten on Wednesday alone.

“While snakebites are common in animals, for us to see three bites in one day is a very, very uncommon,” Drumheller said.

She said the snakes are “on the move” because of hot temperatures and lack of water.

“We are in the middle of the drought, and that really brings out the snakes,” she said.

Drumheller said if one’s pet begins “not acting right” be sure to seek immediate medical attention for it.

“A vet can tell you if it’s because of a bee sting or a rattlesnake bite or if it’s something else,” she said. “These animals are like members of the family and are treated as such.

“If they aren’t acting right, like their normal self, go immediately to a vet. Don’t second guess it if you want to save your dog’s life.”

Drumheller said once a dog is bitten, there are treatment options.

“There is an anti-venom that we can give, but we also have a laser that can be used to break up the snake venom and render it inactive,” she said. “Sometimes we use both methods depending on the number of times bitten and the size of the animal.”

Drumheller said dogs could also be vaccinated against rattlesnake bites. She said the vaccine is equal to three doses of the anti-venom.

Of the three animals bitten Wednesday, one survived after being treated at the vet, she said.

It’s lots of fun at Coleman!

As many 85 children per day have taken advantage of the Will Coleman Community Recreation Center Summer Enrichment Program this... read more