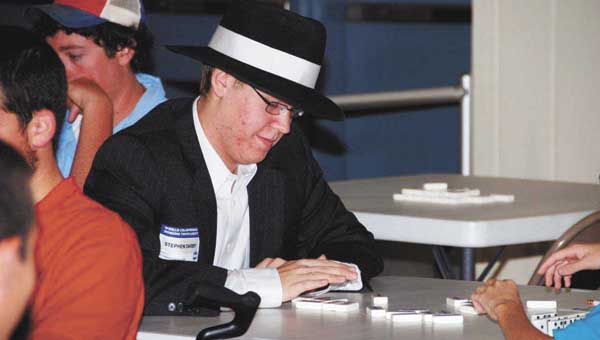 When the Andalusia Rotary Club opens the World Championship Domino Tournament next weekend, many things will be familiar.

Regulars will recognize the format, the process, and the faces of the players in both the youth and adult divisions.

Stephen Darby is one of those familiar places. But this year, he’ll be moving from the teen to the adult division.

“I think I was 10 the first time I played,” he said. “I played with my sister in doubles, and in singles, I got killed.”

He had attended the tournament with his father, local Rotarian David Darby, before, and expressed an interest in playing.

“Dad had taught me a couple of months before, so we played.”

He and his sister, Sara, finished fourth in doubles that first year. He said he like math and picks up games and strategy pretty quickly. Between his 10th and 11th years, he got some more tips.

Darby is referring to Chris Authement of Baton Rouge, La., easily recognizable to locals because he dresses to be remembered, usually sporting a tuxedo or a top hat or both.

In the years since then, Darby has won twice, at ages 11 and 14. He’s also come in second once, and has won the doubles tournament twice.

This year, he plans to play the singles tournament in the adult division, and possibly participate in the round robin tournament.

As is tradition in his family, he’ll start brushing up his game during the Fourth of July weekend.

“I talk to Chris throughout the year, and pick up strategies and random stuff, like, “If someone goes down with double five, play the five/one.” Other than that, dominoes are limited to the tournament. I like to show up and show my skills.”

Photographs taken of him through the years at the WCDT show that while he’s never topped his friend Chris Authement’s attire, he’s chosen some interesting outfits in which to play dominoes.

“Originally, I wore my Robert Horry jersey to represent the roots of Andalusia,” he said. “I went with Chris to the Saints-Falcons game the year the Saints won the Super Bowl. He had a golden tux with a “who d’at” leprachaun on the back. I had just gotten new pinstripe suit, and he made me wear it (to the domino tournament). This year, I think I’ll just be wearing regular clothes.”

“When I believed in luck, I did stuff like that,” he said.

For those who would like to learn the game, he recommends stopping by the tournament, set for Fri. and Sat., July 8 and 9, at the Kiwanis Community Center in Andalusia. Singles play is on Friday, doubles on Saturday, in the children’s, teens’ and adult’s divisions. There will be $20,000 in prize money awarded.

“There are people around who will be happy to teach you how to play dominoes,” he said. “It’s not that hard of a game, just elimination and memory. You can pick it up pretty fast.

Darby is a political science and economics major at Auburn University and hopes to enroll in law school after graduation. Long-term, he’d like to clerk for a judge, or work with the Southern Poverty Law Center or the NAACP.

“I’d really like to help out less affluent individuals with law services and the like,” he said.

Additional information is available at www.worlddomino.com.

He hopes to ‘strike chord’ with judges

Kevin Woodson is competing today in the regional contest for the ‘Year of Music’ songwriters contest. | Courtesy photo An... read more