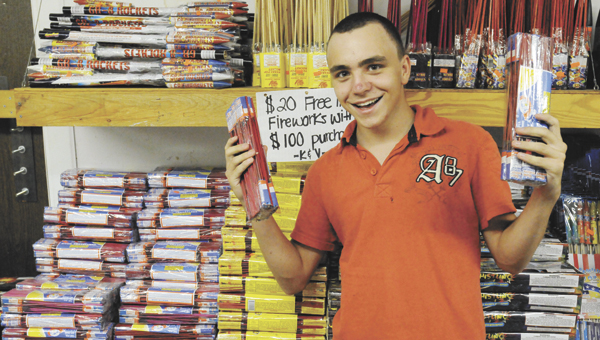 Are you familiar with that “thumping” sound that ends with a flash of colors and bangs?

Artillery-shelled fireworks are the hot item sold this year at many local stands as residents get ready for the July 4 celebration.

“It’s like a professional firework show in one box,” she said. “It goes up and does huge bursts in the sky.”

Hunt said these boxed fireworks run between $70-$100 at the store.

“They seem to be real popular,” Holley said.

Holley added that he also sells a lot of Bottle Rockets and Roman candles as well.

Walking through the aisles at Buddy’s, Florala residents and proud grandparents Cĕcil and Kaye Jones pick out their choices. For Cĕcil, it was the “Grand Dad Fireworks Displays” that caught his eye.

Kaye said she likes buying fireworks for their “entertainment” value.

“The-y’re just great to entertain the youngins’ with,” she said.

The artillery shells run from $2.95 and up at Buddy’s.

At 55 South Fireworks in Andalusia, Bottle Rockets are the big seller for customers.

They run from $2-$4 per pack, depending on the brand purchased.

Artillery shells are $9 and up.

“They produce the most color,” Faust said. “You just drop them in the box and they’ll shoot up in the air and pop into different colors.”

“They’re fun,” he said, grasping his bottle rockets. “It’s fun to shoot them.”

Be in the way for God to bless you: Jesus is the only way