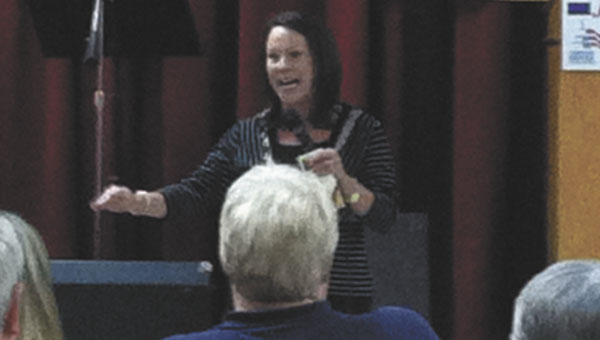 U.S. Rep. Martha Roby, R-Ala., said she and other members of her party who now hold a majority in the House of Representatives have successfully “changed the conversation” in Washington since taking over in January.

“When we got there, all the talk was about how much we were spending,” she said. “Now it is on how much we are cutting.”

Soon, Congress will make a crucial up-or-down vote on whether to raise the country’s debt ceiling. Many economists say if the Congress doesn’t raise the borrowing limits, the effects on the economy will be serious.

“As we move more toward ‘Doom’s Day,’ none of us knows what that looks like,” Roby said. “I can tell you under no circumstance will I vote to increase the debt ceiling unless we have real spending reforms.

Roby was in Andalusia for a meeting of the Common Sense Campaign. Other speakers included Alabama Ag Commissioner John McMillan and state Rep. Mike Hubbard, as well as the Rev. Clyde Northrop.

The first to address Roby, Bill Martin, asked the congresswoman to tell “NBC that the Southern people don’t appreciate them cutting out ‘under God’ from the Pledge of Allegiance.”

Roby said she had already signed a letter about that.

“We can not save the Republic without federal judicial reform,” he said.

Roby said that Alabama Sen. Jeff Sessions is fighting against activist judges, but added that the Senate can only confirm or reject those judges appointed by the president.

Roby said that issue highlights the importance of the 2012 elections.

“We (Republicans) must get a majority in the Senate so that we can have more Article 3 judges who are strict Constitutionalist and strict constructionists.”

Judge Ben Bowden asked about enforcement of the Defense of Marriage Act. Passed in 1996, the federal law signed by President Bill Clinton defines marriage as a legal union between one man and one woman. Under the law, no state may be required to recognize as a marriage a same-sex relationship considered a marriage in another state.

“This is another law the president will not enforce,” Roby said. She said the repeal of the military’s “don’t ask, don’t tell,” has put some chaplains in a situation of having to perform civil ceremonies.

“The House Armed Services Committee has asked, in writing, for justification of the repeal of don’t ask, don’t tell,” she said.

Another man asked if the federal government shouldn’t limit the time in which unemployment could be received.

“I feel like if people were cut off like after six months, like it’s designed, they might find a job. If we keep paying them unemployment week after week, they’re not looking for a job. There are jobs out there, but people don’t want to do them.”

Roby responded that with measured unemployment at more than 9 percent in the state of Alabama, she believed cutting benefits would be a mistake. She said she believes unemployment is actually higher, but that a number of people have given up and stopped looking for a job.

“This is an extension of the Bush tax cuts,” she said. “I hear what you’re saying, but we really have people out there who are hurting.”

Another woman responded to the proponent of cutting benefits by saying that she had personally experienced the downside of his theory when her daughter’s benefits ran out.

“She applies for jobs and goes to interviews,” she said. “And we are having to help feed her.”

A benefit concert featuring B-Shoc, a Christian rap artist, will be held tonight at 6 p.m. at the Dixon Center... read more