He hopes to ‘strike chord’ with judges 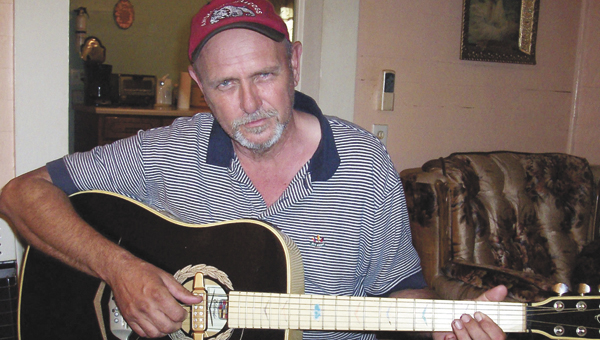 Kevin Woodson is competing today in the regional contest for the ‘Year of Music’ songwriters contest. | Courtesy photo

An Andalusia man is one of 29 people performing their songs about Alabama in front of a panel of judges today in Montgomery for the South Alabama regional round of the “Year of Music” songwriters contest.

Kevin Woodson said he hopes his “Long Way Home” strikes a chord with the judges.

“I wrote this around Christmas 2006,” said the guitar picker and self-taught mandolin, dobro and banjo player. “My boss at Andalusia Music gave me a mandolin for Christmas and I was just playing around and the song came to me.”

Woodson, who has been a musician for most of his adult life, moved to Andalusia 10 years ago to be closer to his children. He is no stranger to performing or to entering a state tourism board sponsored music contest.

He said he won a similar contest in Florida about five years. So, when he got a notice about the Alabama contest, he thought he’d give it a try.

Sponsored by the Alabama Tourism Department as an element of the “Year of Music,” the contest was created to find a new song about the state.

“Most of these contests, you have to pay to enter,” he said. “This one, you didn’t.”

Woodson said when he takes the stage today, he won’t be nervous.

He will perform tonight at 6:30 p.m. at the Exchange at the Renaissance Hotel in downtown Montgomery.

Entries will be based on originality and creativity of lyrics; melody; appropriateness to theme and their overall performance. Regional winners will continue to be chosen throughout the month. The grand finale winner will be chosen July 25 during the W.C. Handy Music Festival and the Governor’s Conference on Tourism. Each finalist receives $500, and the grand prizewinner will receive $2,000 and a recording session at FAME Recording Studios in Muscle Shoals.

The cities of Andalusia and Opp will host Fourth of July Celebrations on Monday. • Andalusia’s will begin at 6... read more