The appointment was made by Sen. Del Marsh, president pro tem of the Alabama Senate based on the recommendation of Spencer Collier, director of Homeland Security. 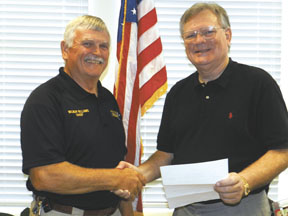 Williams said he has known Collie, a former Alabama State Trooper, for a number of years.

“He was here in April for our pistol competition, and a frank conversation we had that day led to this,” Williams said.

The relationship between Homeland Security and the law enforcement community hasn’t always been great, he said.

“If you look at Homeland Security, we are part and parcel and integral to it,” he said. “If we have a terrorist attack, all of us have to coordinate to get people safely where they need to be.”

Williams said in Alabama there is much greater threat of domestic than international terrorism. But Homeland Security is also part of the response effort in natural disasters like hurricanes and tornadoes.

“The appointment of Andalusia’s chief to this statewide and very important committee is conformation of the quality of our police department in Andalusia,” Mayor Earl Johnson said.

“It is a singular honor for him and there is hard work that comes with it,” Johnson said. “It also is recognition for the outstanding quality of people working in our city.”

AUBURN UNIVERSITY – The mystery surrounding a disease that is killing Southern pine trees could possibly be solved by Auburn... read more