Extreme couponing is the latest fad to take hold of many American households.

Two local residents who’ve been taking couponing for a “test drive” for the past three months said you can save money and are willing to share their tips with others.

Adult Activity Center director Dianne Jones and assistant Debbie Carter, say the key is to watch the sales and deals.

The process begins with buying dozens of newspapers and magazines, researching online couponing blogs and watching 30-second videos to get the latest deals, Jones said.

“There are definitely good deals to be found,” she said. “Most recently, we got two toothpastes, apiece for free and made about $2.60.”

So, how did they make money off of coupons, one might ask.

Several retailers such as Rite Aid offer rewards cards that give in store credit at the bottom of the receipt.

On that particular day, Jones said she got $28 worth of merchandise for $7 and got two $2.62-instore credits.

Jones said that grocery stores like Winn-Dixie will double coupons up to 50 cents each day, but said the way you “really rack up” is on their buy one, get one free deals.

For example, recently she purchased Betty Crocker cake mix, which were on sale for $1.14 each and were a buy one, get one free deal.

Carter said she had a similar situation in which she paid 10 cents per bottle for A1 Steak Sauce.

The pair said couponing isn’t easy to begin with because it takes time to learn where to go to get the best deals, learning what each store’s coupon policy is, and which papers have the best coupons.

Additionally, the two keep a coupon book, which is organized using divided sections such as “health and beauty,” “paper products,” “meats,” etc.

Carter said that Southern Saver, a blog designed for helping shoppers find the best deals with coupons, is very helpful.

“It puts out a detailed list of how you can best use your coupons,” she said. “You tell it what you’re going to buy, and it helps you find the best deals.”

The pair said it’s also best to have a couponing “buddy.”

“For example, I like Colgate toothpaste, but Debbie prefers Crest,” Jones said. “We swap those coupons.”

“It can become addictive,” Jones said. “It’s hard to do to begin with, but then it’s a challenge to see how good of a deal you can get. It’s a great way to save money.” 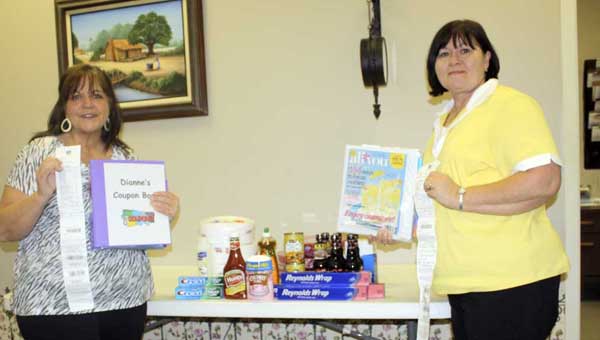 Those interested in learning how to coupon effectively should attend the Andalusia Adult Activity Center’s coupon clippers club meeting on Tue., July 19, at 5:30 p.m.

Jan Kelley, who is a seasoned coupon clipper, will share her experiences and offer strategies to the club.

Waterways have rules, too