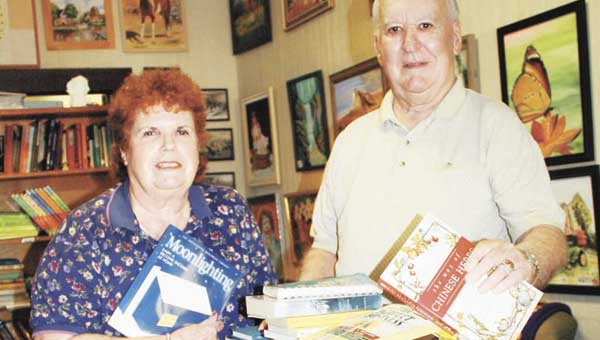 Dr. Jim and Marion Powell show off a stack of books waiting to be given away at the Lucile Pierce Literacy Center. | Kendra Bolling/ Star-News

In celebration of Rotary International Literacy Month, the Lucile Pierce Literacy Center is giving away free books to anyone who needs them.

Organizers Dr. Jim and Marion Powell said they organize the book give- away annually for the Rotary Club.

“We give away everything – children’s books, novels, textbooks and westerns,” Jim Powell said. “All the books are donated from Opp and the surrounding area.”

Powell said this is the fifth year the organization has given away books, and they typically give away 1,000 books.

“You’d be surprised at how many we give away,” he said.

Powell said the center was founded in 2000, and is housed in the Pierce home, which was built in 1905. Lucile Pierce lived in the family home until 1984. Pierce was an educator in the Opp City School system.

“I retired and my wife retired,” he said. “And we wanted something to do in our retirement years, and they needed someone to conduct GED training when the mill closed.”

“We do pre-GED training for those who aren’t ready for the GED,” he said.

Marion Powell said some of those students have gone on to LBWCC to become nurses and to many other trades.

Additionally, they were approached by the local court system to conduct anger-management classes.

Those interested in receiving free books can stop by the center in Opp on Ida Avenue from 10 a.m. until 2 p.m., during the weekdays.

The county school board made nine personnel changes at its Thursday meeting – including hiring Ronnie Douglas as the new... read more