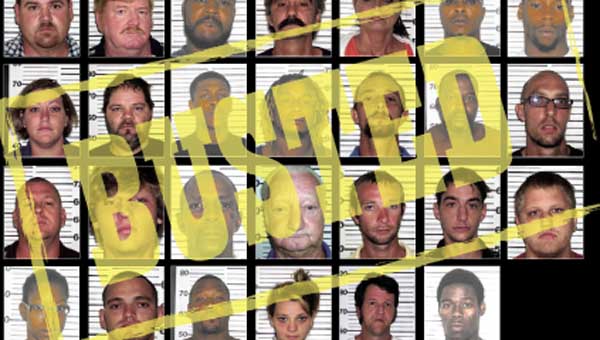 The City of Andalusia spent “several thousands of dollars” on an undercover drug operation in which an officer hired from out of town set up local housing and penetrated a drug organization, officials said Thursday.

“The quote from yesterday was ‘You have penetrated my structure,’ ” Andalusia Police Chief Wilbur Williams said of one of those charged in the sting. “He was quite miffed that he had allowed an undercover agent admittance into his structure.”

The investigation netted 56 individual investigations, including some that will become federal cases. Locally, 36 felony warrants charging 26 individuals with distribution of a controlled substance were issued. Twenty-two of those have been arrested; some were already incarcerated.

“All of the investigations developed as result of drug connections within the city of Andalusia and Covington County,” Johnson said.

“I would like to assure citizens that each and every defendant will face irrefutable evidence of their transgressions,” he said. “We expect we will be able to overcome CSI effect. Will have audio and video to document what we propose happened.”

The chief had high praise for the undercover officer, whose identify is being protected for his own safety and because of ongoing investigations.

“I cannot understate the dedication and tenacity of the person that chose to undertake this job as an undercover officer in this operation,” he said, adding that the operation was compromised early on by an agent “who divulged entire operation plans to people who had no business knowing what was going on.”

That person is no longer employed here, he said.

No obstruction of justice charges were filed.

Williams said the success of the operation proves that “we can’t rely on traditional law enforcement measures, or patrol officers” to fight the drug problem.

Williams said officers can make drug “buys” all day long, but it takes more intensive efforts to get to a higher level and take distributors off the streets.

Johnson said, “This operation was designed to address the concerns of local citizens who sometimes feel that local law enforcement is not addressing issues that exist in the city of Andalusia.”

Williams elaborated, saying that the City of Andalusia provides the “Lion’s share” of support for the 22nd Judicial Circuit Drug Task Force.

“From a statistical analysis of what we receive in return, a low percentage of efforts are dedicated toward the city,” he said.

The 22nd Judicial Circuit Drug Task Force is comprised of five officers, including two deputies, two officers of the Andalusia Police Department; and one officer from the Opp Police Department.

The DTF is governed by a board of directors that is chaired by the sheriff and includes the chiefs of police from Andalusia, Opp, Florala, Red Level, River Falls, Lockhart and Gantt, and the district attorney.

The following individuals were arrested, or have outstanding warrants for their arrests in a round-up operation Wednesday that followed a... read more