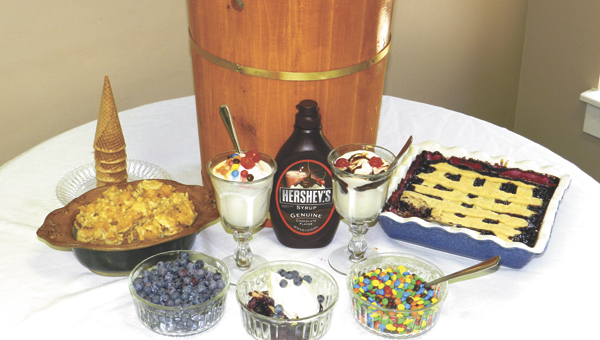 Traditionally, the staff of The Star-News enjoys homemade ice cream at the office some time near the Fourth of July. Last weekend was no different.

Planning for homemade ice cream led to an argument – well, maybe a discussion – about the best way to make the summer favorite when Mollie Riley boasted about her ice cream made from “junket.”

Michele Gerlach insisted that it couldn’t be as good as old-fashioned, stirred-from-a custard vanilla, and the competition was on.

Riley, who likes to claim that she can’t cook, said her recipe is easy and very good.

“This is just the way Momma always did it,” Riley said of making homemade ice cream from a mix. “Granmaw made it the old-fashioned way, but this is the way I learned.”

Riley said her family uses their own variation on the mix, but the package directions are printed below.

Gerlach said she uses the custard recipe for several reasons.

“First, it’s just good,” she said. “It’s tried and true and I know my family likes it.

“Second, I love to cook, so stirring a custard is no big deal. I’ve learned through the years that using a slower process adds layers of flavor to the final product and it’s usually worth the extra effort.

“I sometimes say that I can make anything difficult. I usually make a homemade sauce to go with the ice cream. Who does that when Hershey’s makes a perfectly good one? Then again, Bluebell and Dairy Queen both have great ice cream. ”

Her recipe is from the Southern Living Cookbook (Oxmoor House, 1987.)

Note: Let the ice cream ripen after freezer stops turning. Packing in ice and rock salt and allowing it to sit at least one hour makes for a much better consistency.

Combine cocoa and sugar in a medium saucepan, stir in corn syrup and oil.

Overheard, out and about, Mrs. Grundy sees all, tells all

Peeping through my Venetian blind, I thanked God for the recent rains and prayed for more. Boy, is it hot!... read more