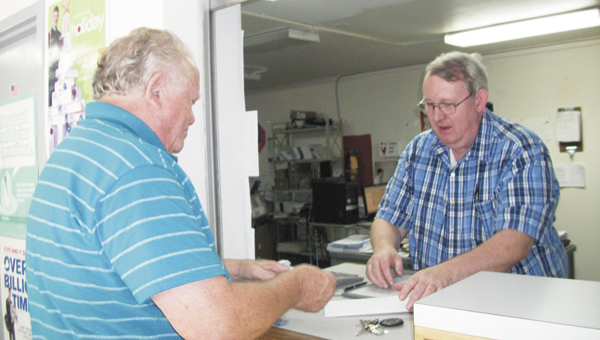 In about six months, the Gantt post office could be the first in the county affected by the U.S. Postal Service’s recent announcement it plans to close more than 40 post offices in Alabama to reduce costs. Branches in Wing, Lockhart, River Falls and Red Level may not be far behind.

About a dozen people attended a public meeting Thursday night, at which postal officials discussed the possible closing.

Ronnie Jackson, Gantt post office’s operator in charge, said the decision to close any post office is made in Washington.

“It’s not on a state level or even regional,” he said. “Once the legwork is done, the paperwork is shifted up. Once all that is done, then the people operating those 40 have to assume that all 40 will close, but that’s not going to happen.”

“There has been no decision to discontinue service at the Gantt Post Office,” she said. “The USPS is conducting a study to review operations. As part of our review process, we conduct a public meeting as we did (Thursday) night to invite customers to share their opinions and for USPS to explain the process.

“Once the study is completed, the findings are reviewed at the District Area in Dallas, Texas, and (Washington, D.C.).”

By law, the USPS cannot close a post office solely for financial reasons. Other considerations such as proximity to other post offices and availability of expanded access in the area are taken into consideration. It is self-funded; however, reduced mail volume and the burden of prefunding retiree health benefits have created enormous financial pressure on the USPS, Fetterly said.

“We’ve closed one Area Office, which was in Memphis,” she said. “Alabama used to report to that office, but now we report to Dallas.  Approximately 7,500 administrative positions nationwide have been cut, too.”

And it’s understandable that as a business, one must pay attention to the bottom line, said Gantt town clerk Christy Cartwright.

Cartwright said she was told that those who elected to not install mailboxes at their homes would have to travel to Dozier to use the post office, which is a little more than 10 miles away.

“That’s a big deal for residents,” she said. “One of the biggest comments we heard was that you can get your stamps and such online. Most of our residents are elderly who don’t know how to use a computer.”

Residents affected have the option of installing mailboxes at their home or using boxes in Dozier; however, Jackson said residents have expressed concerns about security.