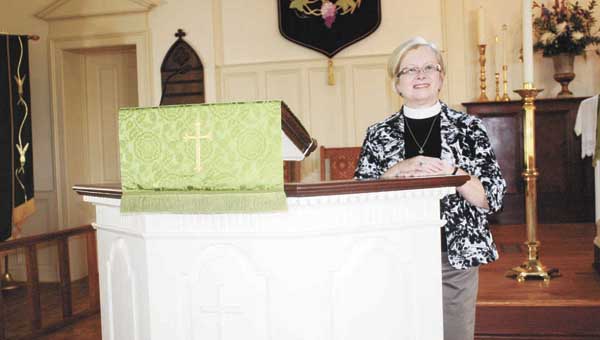 There’s a new face in the pulpit at St. Mary’s Episcopal Church.

The Rev. Cindy Howard, who came to Andalusia from Lee’s Summit, Mo., in the Kansas City area, has been a priest for about four years. She gave her first homily at the church last Sunday.

Before becoming a priest she was a university professor who specialized in health care administration at St. Louis University, the University of Alabama at Birmingham and University of Kansas Medical Center.

Howard said when St Mary’s officials contacted her, she and her husband, Jerry, traveled to Alabama to talk.

“We decided to do it,” she said. “My daughter is in Mobile, and my mom is in Montgomery. We wanted to move to a warmer climate. We loved St. Mary’s, and it fit a lot of the things we were looking for.”

Howard, who grew up in Missouri, said she never expected to be in the ministry, as she was very satisfied with her job as an educator.

“I grew up Southern Baptist and chose to be Episcopalian as an adult,” she said. “I sang in the choir and felt it was what I needed to do.

“Every day it has been confirmed to me,” she said. “I loved my job before, but I really don’t miss it.”

While teaching, Howard had some once-in-a-lifetime opportunities, including teaching in Armenia and Bosnia in the 1990s.

Howard said she went abroad post-Soviet Union, when each country’s economy was changing.

“I taught hospital administrators,” she said. “It was very fun and exciting. It is so much different, but it is always a life-changing experience.”

Additionally, Howard has made two trips to Israel and Palestine in the last two years.

“I absolutely love it,” she said.

So, just how does one become a parish priest?

“You must be approved by a bishop,” she said. “Who must say it is OK for you go to seminary. I went to the Seminary of the Southwest in Austin for three years, and I was ordained as a priest in Kansas City.”

Howard said in order to become a priest; she had to go through all kinds of committees, pass a psychological evaluation and a criminal background check.

“Everyone was very welcoming and hospitable,” she said. “I love Andalusia, and it’s a very lovely, pretty little town.”

Anyone interested in learning more about the Episcopalian church can take part in a three-week intro class beginning July 17.

Andalusia High School and the Quarterback Club will induct four former players and the 1947 football team during its second... read more