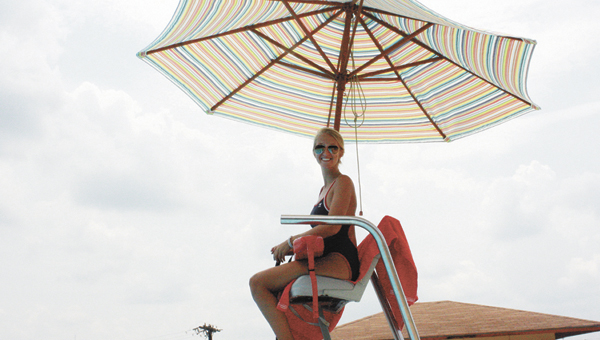 City of Andalusia lifeguard Maggie Jones uses an umbrella to shield herself from the harsh temperatures and blazing sun Tuesday at Cooper Pool. | Kendra Bolling/Star-News

The combination of record-breaking temperatures, sweltering heat and humidity can be a deadly combination, health department officials said Tuesday.

And because of that, Terry Kyzar, environmental supervisor for the Covington County Health Department, said it’s important for residents to be alert to the warning signals of heat illnesses.

Temperatures throughout Covington County are expected to reach highs in the upper-90s throughout the week with heat indexes reaching 107 degrees.

Kyzar said he knows of at least one person who has suffered a mild heat stroke this summer.

“I had a guy I know who was deck handing and didn’t pay attention and didn’t drink any water,” he said. “By about 12, he started feeling nauseous and dizzy. He had a mild case of heat stroke. It can slip up on you before you know it.”

Heat stroke occurs when the body becomes unable to control its temperature.

The body’s temperature rises rapidly, the sweating mechanism fails and the body is unable to cool down. Heat stroke can cause death or a permanent disability.

It is recommended to get the person to a shady area, let them cool rapidly in cool water, splash with cool water and fan vigorously.

Kyzar said people should stay indoors as much as possible.

“It’s summertime and people are outside, and they are going to be outside, it’s vacation time,” Kyzar said. “Stay in the shade as much as possible. Drink lots of water. Wear loose fitting clothing. When you are working outside, don’t get over heated. Stop and take frequent breaks.”

Kyzar also recommended wearing sunscreen with an SPF value of at least 15.

Individuals who have heart problems, poor circulation, diabetes, have had a previous stroke, or are obese are at a greater risk of becoming sick in hot weather, he said.

Additionally, residents are encouraged to check on the elderly and ensure pets have plenty of water to drink and a shady place to cool off, and never leave them in a parked car, he said.

The annual Andalusia Area Chamber of Commerce golf classic and three-man scramble will be held Fri., July 26, at the... read more