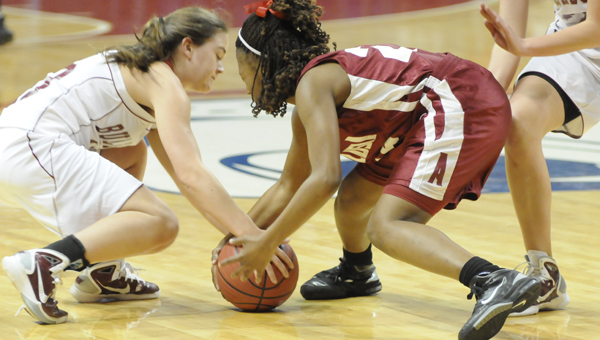 Before the sun comes up, Andalusia High School rising senior Alexis Horton is just getting warmed up.

Horton gets out of bed at around 5 a.m. and goes to shoot around in LBWCC’s gym.

When her warm up is finished, Horton heads to the high school to participate in girls summer work outs with assistant coach Teresa Herring.

Horton has been performing this routine since the week after school let out to prepare for this week’s Alabama High School Athletic Association’s 2011 All-Star Sports Week.

“I’m just trying to keep everything picked up,” Horton said about preparing for the game (tonight).

Horton’s team will tip off at 6 p.m. in the Alabama State University’s Acadome.

For the past two days, Horton has been participating in team practices with other girls on the south basketball team in Montgomery.

When she heard that she was going to play on the South team, Horton said she got “all worked up.”

“I was very excited,” she said.

Horton helped lead the Lady Bulldogs to a 25-5 season in her junior year, and averaged 19.2 points per game and 4.5 assists.

The team playing together was the big thing that led to her success last year, Horton said.

“The people I’ve been playing with we’ve all been playing together since second grade,” she said. “We knew each other, and kept it on going.”

Additionally, Horton said she knew she had to work hard last season to earn a spot on the south All-Star team.

“There are a lot of great players up there,” she said. “Really, everybody has been telling me that hard work does pay off. I gave it my all for this.”

Her family will make the trip tonight for the game.

12U softball looks for home run at state tourney