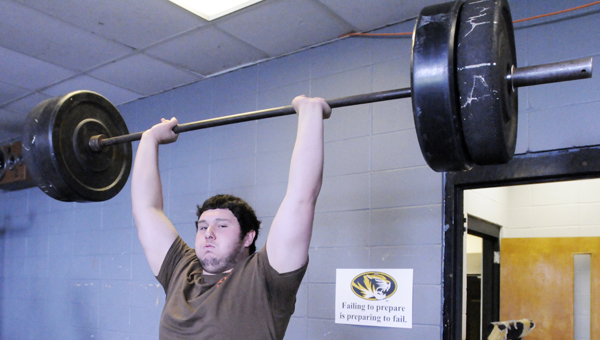 Andalusia’s Alexis Horton dribbles down the court during the regional tournament against UMS-Wright last season. Horton will compete in the 2011 South All-Stars basketball game tonight at 6 at the Alabama State University Acadome. | File photo

In fact, that’s why he picked Huntingdon College in Montgomery — a school similar in size to his alma mater Red Level High School — to play football for the Hawks.

“I went up there and visited the day I graduated, and it felt like the right choice,” Worley said. “I like everyone up there that I met — the coaches and everything.

Worley graduated from RLS in late May.

He played kicker, defensive tackle and offensive line for the Tigers during his four years at the school.

Last year, he won in his weight class at the Class 2A state weight meet.

The 6-foot-2, 300-pounder will enter a football program where physical fitness is a key, Worley said.

Right now, Worley’s goal is to drop 10 pounds to get ready for the fall.

“It’s all about conditioning your muscles to last longer,” he said about the Hawks’ workout program. “When you condition your muscles, you also control your breathing.

“It’s all about quickness,” he said. “It’s something I’m going to have to get used to. I don’t mind the work outs. I love the work outs.”

Worley said his most memorable moment as a Red Level Tiger came during the 2010 season, when his team earned a play off berth.

“When we played Zion Chapel, we had to win that game to make it to the playoffs,” Worley said. “That was probably the most memorable because we hadn’t gone to the playoffs in the last four to five years. It was a basketball game score, but we won.”

When Red Level got to the playoffs, the Tigers were paired with Southern Choctaw.

“It was a tough night,” Worley said.

Worley said he plays football because he considers it a game of “life.”

“When you play football, it’s like everyone on the team — the players and coaches — are your family and you have everyone looking out for you,” he said. “And, it’s fun.”

Worley is the son of Terry Jerone Worley of Red Level, and Jennifer Lynn Montgomery of Monroeville.

Before the sun comes up, Andalusia High School rising senior Alexis Horton is just getting warmed up. Horton gets out... read more