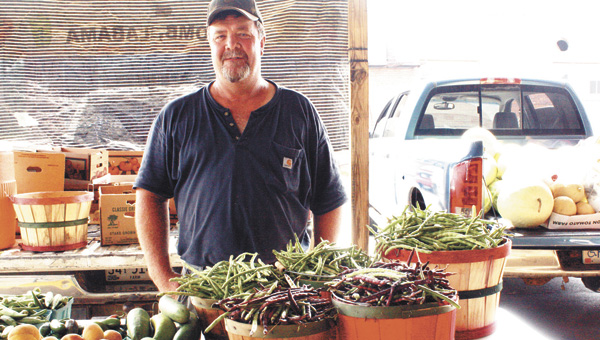 Kevin Battles was among the farmers at the PowerPlant Marketplace who had peas for sale on Wednesday. | Kendra Bolling/Star-News

The PowerPlant Market Place was abuzz with talk of fresh peas on Wednesday.

One vendor who had fresh peas yesterday sold out of all of his peas before 9 a.m.

Pleasant Home eighth grader Hunter Lindsey didn’t bring any peas with him, but said he’d have plenty at next week’s sale.

“This is my first year planting a garden,” he said. “We planted watermelons, peas, corn, peppers and tomatoes. We have two types of peas – Mississippi cream and purple hull peas.”

“They are making good,” he said. “The purple hulls didn’t do as well as our Mississippi creams.”

Slocomb vendor Kevin Battles, who comes to the local farmer’s market every week, said he’s made about half a crop this year.

Battles is selling his peas for $23 a bag for purple hull and $25 a bag for the white peas, he said.

As for production, he said he’s making about the same amount of purple hulls as white peas.

“We just planted another crop,” he said. “But it’ll be a while before they come up.”

Other farmers at the market said they’ve had a big problem with deer eating their peas.

Ron Brooks of Libertyville said “his neighbors with white tails” had been eating his peas.

“I’ve thought about shooting them,” he said. “But I have so many neighbors around, I wouldn’t want to do anything to harm them, but those deer have eat up all of my peas.”

Places like Wingard’s Produce have peas, but there’s a waiting list if you want a bushel or more.

“We’ll take orders for bushel bags,” Sharon Wingard said. “And we’ll continue to take orders until the fall of the year. Thank goodness last year, we were able to fill all of our orders and have some left over.”

Wingard said that they have small bags of white peas available all the time for about $3.75 a pound.