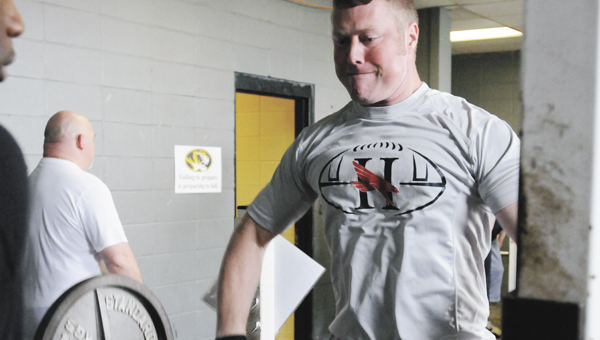 Horace Graham participates in workouts, showing players how to do a power cling. | Andrew Garner/Star-News

He’s brought a new workout program he believes will help the Tigers become stronger and more balanced on the field.

Graham graduated from Straughn High School in 1999 and joined the Army, where he served for three years.

After his stint in the military, Graham went back to school, spending one year at LBWCC, and the last three playing tight end at Huntingdon College.

While in college, Graham served as an independent contractor for FedEx, the shipping company. He owned FedEx trucks and would pay drivers to run their routes.

“That’s how I afforded college,” Graham said. “I didn’t make a whole lot of money on it, but it put me through college.”

He spent one year as an intern on Huntingdon’s coaching staff, and he’s been in the area ever since.

Graham explained that the workout program be brought from Huntingdon “increases their work load over a longer period of time.”

“It’s more getting them a little stronger and more conditioned than anything,” he said. “We don’t want guys with their hands on their hips in the fourth quarter.”

Red Level just returned to its normal summer workout schedule on July 5, after the holiday.

Ever since the first day of work outs, Graham said he has noticed a change in the players’ abilities. They are getting stronger and are more balanced, he said.

“They’re controlling a lot with their body,” he said. “The kids lacked in that. I’ve seen big improvements with them handling their body and balance, which is a huge part in football.”

Graham will serve as the offensive line coach for the Tigers, and as the JAG teacher at RLS.

Graham is married to Shannon Graham, and the couple lives in Andalusia.

When Louis Edward Berry Sr. left Andalusia to retire in Montgomery, he never thought he‘d be considered as an inductee... read more