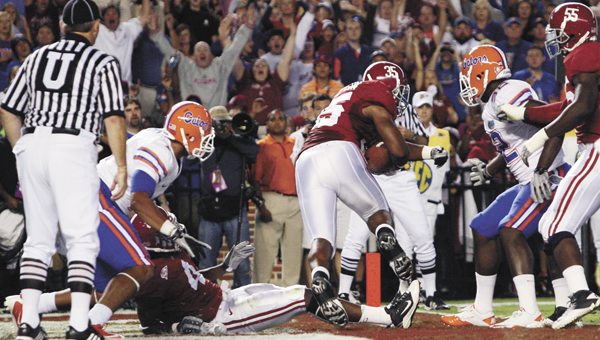 Andalusia’s Nico Johnson was one of three University of Alabama players and nine SEC players on the watch list for this year’s Butkus Award.

Alabama had more players on the watch list than any other team. Dont’a Hightower and Courtney Upshaw also are among the 51 on the list.

The award is named for Dick Butkus, who played football at Chicago Vocational High School, the University of Illinois and for the Chicago Bears. He was elected to the Pro Football Hall of Fame in 1979. The Butkus award is presented annually to the top linebacker, on their home campus, in December.

Johnson has started in eight games and finished his sophomore season with 33 tackles, including a key interception against Florida.

“It’s certainly an honor,” Johnson said Friday afternoon. “But it’s not anything I’m concentrating on right now. I still have to work hard and keep working hard, and that’ll take care of everything else.”

When asked if the nomination will open any doors for him, Johnson was Sabanesque.

“Again, I can’t concern myself with that,” he said. “I just have to keep working hard and take care of business.”

He said his summer has been mainly about workouts.

UA coach Nick Saban is among the selectors for the prestigious award.

Previous Alabama winners include Rolando McClain in 2009 and Derrick Thomas in 1988.

The Andalusia Stingrays have one goal in mind when they travel to Dothan this week to take part in the... read more