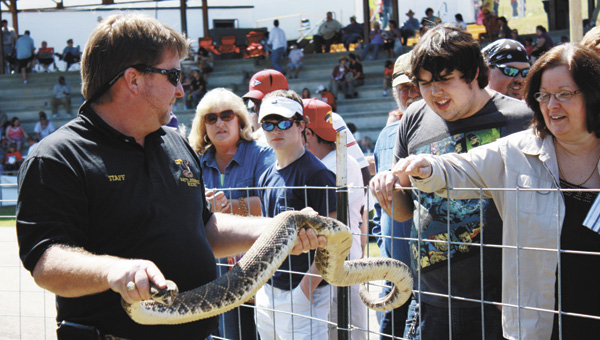 Rattlesnake Rodeo preparation is set to begin in the coming weeks, as the Opp City Council voted to give the Mayor H.D. Edgar authority to coordinate the 2012 event.

All council members, with the exception of District 2 councilmember and mayoral candidate Jimmy Rogers, voted in favor of continuing the practice of allowing the mayor to coordinate the rodeo.

Rogers said he voted “no” because he felt it needs “different ruling.”

At the workshop prior to the meeting, Rogers expressed concern about giving vendors exclusive rights to sell their product.

In past years, the city has given Pepsi the exclusive rights to sell drinks after they offered thousands of dollars in sponsorships. The same deal has been given to a T-shirt vendor, who donates some $7,000 in sponsorships and donates 100 shirts for the rodeo staff.

Rogers, whose wife and others wanted to sell rodeo shirts, but were not allowed to because of the exclusive rights contract, said he thinks everyone should have the same opportunity, especially the people of Opp.

“I think it’s unfair to give exclusive rights,” he said. “Big items are shirts. The council gave you (the mayor) permission to organize and run the rodeo, but I want to make a motion that everyone have the same opportunity.”

“I don’t know where you get off thinking it’s pick and choose,” he said. “It’s a sponsorship — it’s not picking out.”

Rogers said the ladies were allowed to participate the first two years, but they wound up with too many shirts.

“I, personally, sat up at the old Gulf Station and helped them sell those shirts,” he said. “This business supplements part of her income.”

Rogers said the ladies probably wouldn’t want to come back to the rodeo, but his concern is “the future.”

“We have a Rattlesnake Rodeo trademark,” he said. “It’s our official shirt.”

But, Rogers said, “I knew I was burning daylight to even bring this up.”

The nearly 7 inches of rainfall recorded in parts of Covington County during the last week has done its part... read more