Bible School in the water 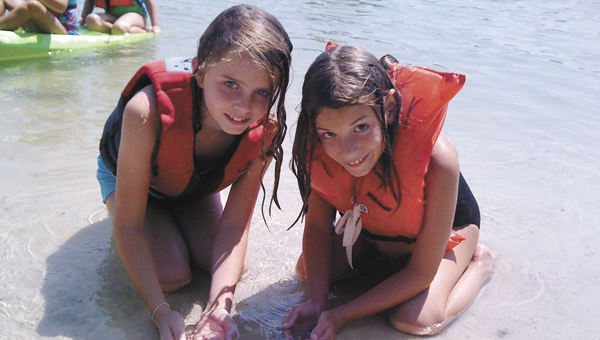 Sydney Ward and Ashlyn Nall play in the water at Blue Lake on Thursday. | Andrew Garner/Star-News

The theme this year is water, and its importance in the Bible.

On Thursday, the vacation bible school was held at Blue Lake Methodist Camp, where participants enjoyed a bible study led by the Rev. Cindy Howard on being fishers of men, swimming in the lake, arts and crafts and a meal.

“It’s going really well so far,” St. Mary’s representative Chrissie Duffy said. “I don’t know if we’re going to do it like this in the future. We are doing it differently this year.”

In years past, the churches have usually done a week-long program at a different church each year.

“We put our heads together and came up with a theme,” Duffy said. “We’ve kept it really simple and on a level they can understand.

“Instead of spending so much time and energy buying a bunch of stuff to stick on the walls, we’re spending all of our time and energy with the children and putting our creative minds to work,” she said.

Every story taught at the vacation bible school has revolved around water, Duffy said.

“It’s been really fun,” she said. “We learned about Peter and Simon (in Bible study) and we learned new songs.”

A local family is again asking the community to give the ultimate birthday gift – life. At 4 months old,... read more