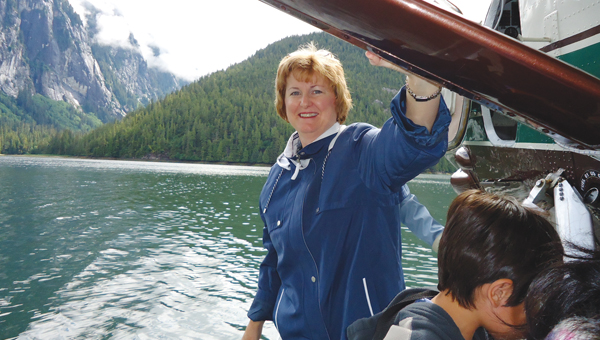 Angie Sasser steps out of a seaplane in Misty Fajords, Alaska, during a recent vacation.

Editor’s note: For Andalusians Wayne and Angie Sasser and Paul and Judy Armstrong, as well as Gulf Breeze, Fla., residents, Bill and Rita Rone, a recent cruise to Alaska was a dream come true.

In Mrs. Sasser’s words, the following is a description of the group’s recent trip:

Alaska – My knowledge of this “foreign land” was like most Americans’ – igloos, Eskimos, frigid cold, tundra, taiga and polar bears. Our journey was about to enlighten in ways I could not even imagine. It’s a land just a plane ride away toward unimaginable sights, adventure, pleasant summers and Americans like me. All this, and we shared it with our dear friends, the Armstrongs and the Rones.

Stepping on board the Princess Coral was like putting on a Cinderella gown – we were treated like royalty. Our rooms were large and well-equipped, with balconies from which to observe the endless days and ocean sights.

The ship is like a town within itself, so our first two days at sea were spent exploring. Early morning viewing from the balcony rewarded our group with Dall dolphins, which resemble orcas in coloration, that swam in the wake of the ship as if guiding the way north.

Day three put us in the port of Ketchikan, the fourth largest city in Alaska. It has a temperate rainforest-type climate, and is located at the Tongass National Forest. We had a magnificent excursion on a seaplane to Misty Fjords National Site, where we landed in a lake and walked out on the floats for pictures. Jagged edges, emerald waters, mountain waterfalls and snow-capped peaks were waiting for our admiration. The pilot even let Paul Armstrong, a pilot himself, sit up front.

Day four was spent in Juneau, the state capital and third largest community with about 60 miles of roads that do not lead out. There are three ways to get to the Juneau borough – by boat, by plane or by birth. In the afternoon, we took the Veteran’s Memorial Highway to Echo Cove for a vessel excursion of whale and glacier viewing. This was the coldest part of our vacation with the wind chill effect necessitating gloves, caps and heavier jackets. We were rewarded with humpback whales, eagles and orcas. An hour-long stop at the very accessible Mendenhall Glacier was enlightening, and Nugget Falls was plentifully supplied with water from glacier melt.

Day five presented the tiny town of Skagway and its 800 permanent residents. It is a remnant of the Klondike gold rush days and has a frontier town feel to it. The highlight of this stop was the White Pass Railroad trip to Caribou Crossing in the Canadian Yukon territory. The route of the Klondike gold rushers of 1897 was demonstrated as well as stories of their perils. Only a few of the thousands who flocked to Alaska actually struck it rich. Fauna included moose, porcupine and eagles. On the way back to Skagway on the White Pass Rail, we spotted a black bear grazing near the tracks.

Days six and seven were spent at sea, but the sights were going to get even better. We spent all of day six within Glacier Bay National Park with magnificent views of too many glaciers to count. We found that the size of the ice was impossible to imagine. What appeared to be a stone’s throw away was actually several miles. Icebergs and glacier slush surrounded the ship the closer we got to a “calving” glacier. We were thrilled to hear “white thunder” as we watched Marjerie Glacier break off several times.

Day seven presented College Fjords and its various glaciers named after Ivy League schools. Yale and Harvard glaciers were the highlights of this viewing.

The next morning we landed at the tiny port of Whittier where we boarded buses for our passage through the 2.5 mile, one-way tunnel out of town. The tunnel was built during WWII for military purposes after Japan invaded the Aleutian Islands. We then made our way through Portage, Anchorage, Wasilla, and Willow. Our driver pointed out the recent fence built by Sarah Palin to prevent her new neighbor in Wasilla from viewing their home as he writes his book about her.

A two-hour stop in downtown Anchorage, Alaska’s largest city, was highlighted with a shopping excursion at the Saturday Market.

We arrived at Denali National Park Princess Lodge after several hours on the road and proceeded to our dinner theatre production. The musical production highlighted the history of Mt. McKinley’s exploration.

Sunday morning took us the short distance by bus to the train depot and a four-hour trip on the Alaskan Railroad to Talkeetna. The sides and top of the Princess Rail Cars were made of glass, giving panoramic views of mountains and wildlife.

We arrived at the quaint town of Talkeetna early afternoon and walked with other tourists down Main Street, admiring the crafts and plentiful flowers. We had still not seen a view of “The Great One” and seeing Mt. McKinley was on our short list. Asking a local, we were told to walk all the way down Main Street to the sandy beach of the convergence of three rivers (Susitna, Chulitna, and Talkeetna Rivers), and look west through the tree opening. We literally squealed upon seeing the many clouds that surrounded the mountain suddenly opening and allowing us to see its magnificence. At first we were looking too low as warned—it was REALLY high up there! We are now members of the 30 percent Club—only a third of people visiting Denali actually get to the see the mountain. It makes its own weather and is usually surrounded by clouds that obscure viewing. We must be living right!

Our next two nights lodging was an hour’s drive by shuttle bus to the Mt. McKinley Princess Lodge—a secluded place 40 miles from McKinley on a hilltop allowing wonderful viewing of the prize. Our excursion here was a four-hour rafting trip the next morning down the Chilutna River. We caught glimpses of eagles and their nesting sites.

Our meals were taken at the lodge’s restaurant called 20320 Alaska Grill. Our first thought was, “it must be the zip code” but quickly we realized that it was named for the elevation of Mt. McKinley. That evening at 11:20, we were alerted that the mountain was viewing-friendly and we were rewarded with our final glorious view of McKinley. Yes, 11:20 p.m. It never truly got very dark the entire time we were in Alaska. Flying into Seattle on the way home was our first glimpse of darkness in two weeks.

All good things must come to an end. We got about two to three hours sleep on the “red-eye” coming home through Houston to Pensacola. I met a woman in Pensacola airport from Milton who teaches across the hall from my first cousin. Small world. Yes, it is a small world after all and Alaska is just a flight away. I hope to take that flight again one day. It’s on my bucket list … again.