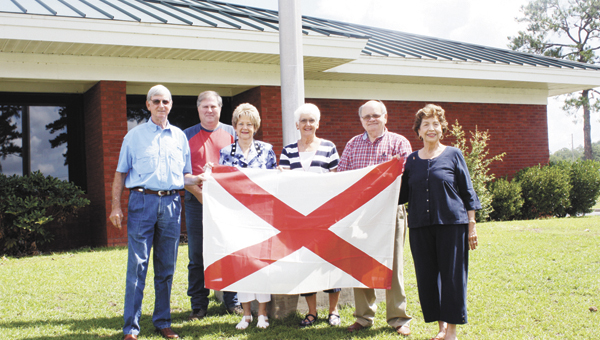 The Old Three Notch Chapter of the Daughters of the American Revolution presented an Alabama flag to the Covington County Commission on Friday, but it wasn’t an ordinary flag.

This flag has traveled some 7,000 miles across the Atlantic as part of the state DAR’s Project Patriot in which the state society sent Alabama flags to a National Guard Unit serving in Iraq.

Ann McGlaun of the local chapter said they received the flag in 2005 and have been looking for someone who needed a flag.

“I noticed it at the Fourth of July celebration and told my husband that the USDA building could use it,” she said.

Jean Jones of the DAR shared the history of the Alabama flag.

Jones said that when Alabama became a state in 1819, no one thought about making a flag for the state.

“When we seceded from the union in 1860, we were embarrassed that we didn’t have a flag,” she said. “Some women in Montgomery designed us a flag. It had the words, “Independent, now and forever” on it.”

After the war, Jones said the state flew the U.S. flag once again.

“In 1895, the legislature realized we didn’t have a flag,” she said. “They authorized a St. Andrew Cross on a field of white.”

Jones said that the St. Andrew Cross is for Andrew, one of Jesus’ 12 disciples, who was crucified in the time of Nero.

County Commission Chairman Lynn Sasser accepted the flag and said it would be framed and placed in the courthouse.

Parents team up to keep Christian school in area