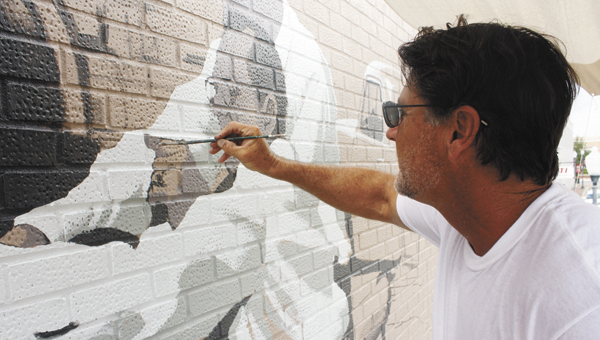 You see his work all over town. From the Cedar Creek Merchandise mural depicting the county’s logging and turpentine history, to the “in the works” murals on the Pirate Graphics building, Wes Hardin is using his talent to tell the story of Andalusia’s roots.

Hardin, of Dothan, said he has been in the mural business since 1978, the year he graduated from high school.

“I had my first mural commission when I was 18,” he said. “It was for a local junior college.”

Hardin said that painting is something he enjoyed doing as a teenager and it just took off from there.

His favorite murals to paint are those in which he can find a personal story.

“I enjoy being out on location, and having someone stop by who was actually part of the story,” he said. “It makes it a really worthwhile experience.”

Hardin said in Andalusia’s case, it’s about telling a stories of the city.

He is currently working on a three-panel mural on the side of the Pirate Graphics building facing East Three Notch, which will depict early utilities in the county.

Hardin said he is using photographs supplied by a local electric company for the murals.

“Chances are someone is going to ride by and realize that’s his grandmother or that’s her grandfather,” he said. “Perhaps even a mother or father or aunt or uncle. It’s a personal history for those folks.”

“I try to do my best to capture what it was really like for the people in the murals,” he said. “Hearing the stories really brings it to life.”