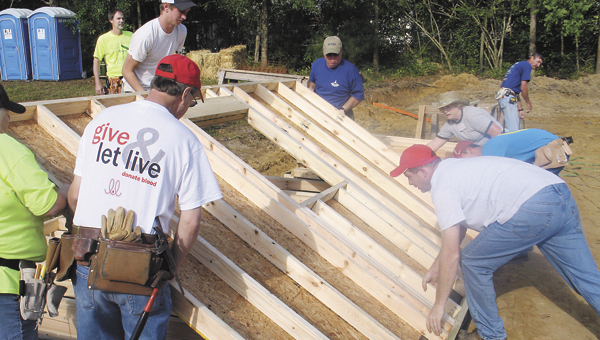 The Covington County Chapter of Habitat for Humanity has cleared its final hurdle for its upcoming Florala build.

Previously, chapter officials said the building for the county’s third Habitat home would begin in April or May; however, issues in securing a clear title delayed the build.

That wait may soon be over after the Florala city council adopted an ordinance to sell the third-of-an-acre lot on Cypress Street to the local Habitat chapter for $1,000.

“Now, this worthy organization can move forward in building a new home for a Florala family,” said Mayor Robert Williamson.

At present, the Florala family is one of two awaiting a new home. Another is from Opp. Both have been working to meet the Habitat requirements for a new home, which include performing sweat equity hours and financial education classes.

Families must meet certain requirements to qualify for a Habitat home, including an income requirement. The family selection committee is responsible for evaluating the applicants and choosing a Habitat family.

It costs approximately $60,000 to construct a Habitat home, and officials have said most of the funding is in place to cover the cost of the next Habitat building.

The $10 Club is Andalusia’s First United Methodist Church drive for people to pledge $10 a month for a year. Participation is ongoing.

It is unknown when the Florala build will begin.