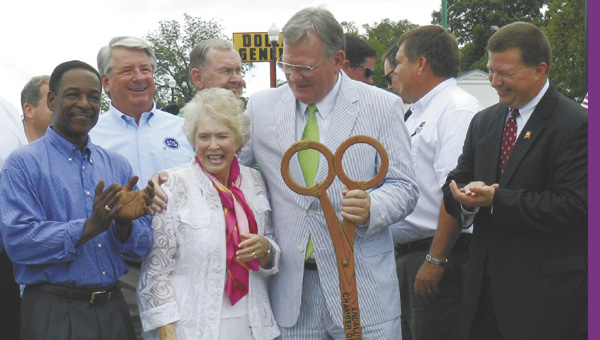 Just before the current city administration took office in late 2008, members agreed upon a number of goals for their four-year term.

Improving River Falls Street was among them. But no one was more serious about it that Councilwoman Hazel Griffin.

She walked River Falls Street, talking to business owners and promising to try to get the project done.

From November until February, Griffin asked about the possibility of doing something there at every council meeting.

That was nothing, Mayor Earl Johnson said.

“Ev-ery other day, she was in my office,” the mayor qui-pped. “You ain’t ever been under any pressure until Hazel gets after you.”

Thursday, Griffin was all smiles at the ribbon cutting, one of her first public outings since having a knee replacement.

“I was so excited I couldn’t sleep last night,” she said, smiling broadly. “I couldn’t believe it was finally here.

“We had so much help with this project, and so many people had wanted to help before we came on board,” she said. “It’s a good day.”

On Thursday, students at Andalusia High School participated in ‘Class Days’ and received schedules and assignments for lockers and parking... read more