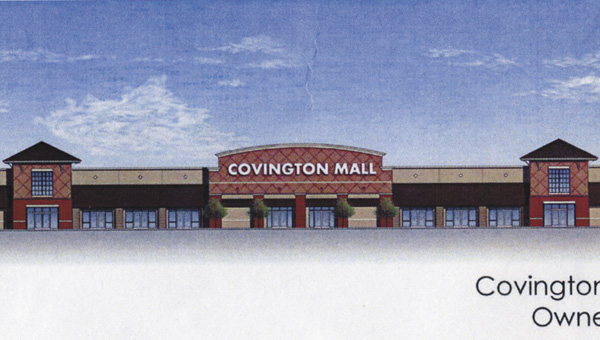 The new owner of the Covington Mall said he plans to renovate the facility and already has a letter of intent with at least one new tenant. There’s also a “conversation” with a “major national restaurant” about located in the outparcel where an empty gas station now sits.

John Tisdale said he plans to improve the facility’s parking lot, rework the exterior façade to create a new entrance, and improve the interior facades.

Tisdale said he has a letter of intent with a retailer for a “large space” and is talking with two others.

“They would be good for Andalusia and the people of Andalusia would enjoy them,” he said.

Danny Solomon, a Realtor who’s working with Tisdale on the project said “We’ve got a good prospect for the old service station, a national restaurant company.”

Tisdale said he already has roofer and HVAC employees on the scene. The parking lot project will come next, addressing drainage issues, and then the façade.

Tisdale estimated the improvements will cost more than $2 million.

Merchants are pleased with the news.

Dennis Cockrell, manager of J.C. Penney, said, “The improvements to the mall are the cake and the River Falls Street improvements the icing. The street will not initially improve my business but it will attract business to the area, which will bring more customers to the mall.

“I was 100 percent for the street improvements and think it turned out well,” Cockrell said. “ As far as the mall is concerned, I can’t wait for it to be completed. This will bring us into the 21st century and help attract tenants that otherwise might not consider the mall. It’s a huge win, win for everyone concerned.”

Singer owner David McBrayer, whose business has been in the mall for 36 years, said he’s really excited about the work Tisdale is planning.

Tisdale talked about his plans just after the City of Andalusia held a ribbon cutting to celebrate the completion of its River Falls Street improvement project.

The project represented a $3 million investment in the infrastructure of the area, which was funded by the stimulus program.

Johnson recognized many who helped make the projects possible, including CDG Engineering, who partnered with the city to complete a plan before the city even knew if it could secure funding for the plan. The firm agreed to do the design work for half price if the city didn’t get the funding in place.

“They took a substantial risk on this project,” Johnson said. “Without that risk, we probably wouldn’t be here today.”

Florala City Council members have agreed to pursue a plan that would change voting districts before the March 2012 primary.... read more