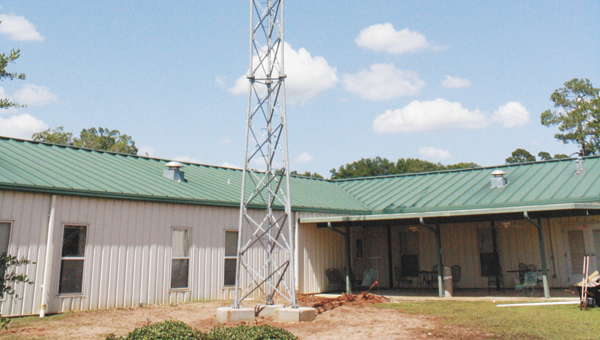 A tower some 40 feet tall was moved from the 911 office to the EMA office in order for better communication during disaster. | Stephanie Nelson/Star-News

Work is under way on the county’s first permanent emergency operations center.

Susan Harris, the county’s emergency management agency director, said the facility is housed in the east wing of the Hillcrest Drive administration building. It will serve as a command post during times of emergency such as in a natural disaster.

Those visiting the complex may have noticed the ongoing construction in the rear of the building of what Harris describes as the greatest contribution to the project – a new radio system.

“It’s the radio tower that was moved from the 911 center,” Harris said. “We received an EMA grant that allowed us to have a radio system where you can patch into all radios in the county at one time.

“For us that’s a very important feat, because not all radios are the same kind or work on the same frequency,” she said. “This system will allow all of those radios to work together, so when I need to get information out, it goes out to everyone at one time. Instead of having to say something five times, I can say it once. It cuts down on time getting the information out, and it cuts down on response time.”

Harris said the EMA office was relocated in the old water authority offices and the EOC established across the hall.

“We’ll have a radio room and another for our amateur ham radio operators, as well as an area specifically for representatives from the different agencies in the county, which is a first for Covington County,” she said. “During a natural disaster, there are several different things happening at one time. Now, we have an area where everyone from the National Guard to the health department to municipal and county government can stay and get information as it becomes available.”

Harris said all the items utilized in the EOC, from the radio system to the office equipment, has been purchased through grants and federal and state money.

“Next, we’re hoping to get a generator through a grant,” she said. “We’ve tried very hard to do this project at no cost to the taxpayers.”

Harris said she hopes to have the facility completed in the next few months and plans to hold a grand opening for the public.

“But don’t worry, if disaster strikes, we’re prepared,” she reminded the public.

As the new school year quickly approaches, it’s time for parents and their school-aged children to begin tackling their back-to-school... read more