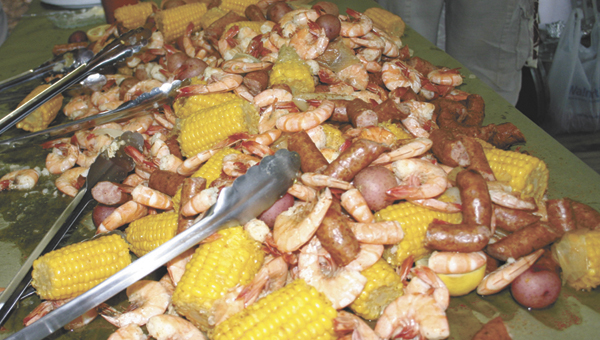 Organizer Martha Chisum said it’s something arts council members have been working on for quite some time, “Ever since Jo Kelley in Andalusia had one.”

“I did not get to go that night, but they said it was just wonderful,” she said.

Kelley is a member of the OCAC, Chisum said.

“At their boil, they invited artists to bring one of their paintings and tell where they got their inspiration,” she said. “Ours is going to be different in that it will center around the entertainment.”

Pure and Simple Bluegrass from Dothan will perform.

The band consists of six members who “would rather play Bluegrass than eat,” their website said. “We play Bluegrass with a little comedy and magic thrown in, and sometimes you may even hear a little Lynyrd Skynyrd.”

“Travis Perry of the band is from Opp, but no longer lives here,” Chisum said.

Chisum said the Aug. 19 event will “kick off our fall season.”

“We’re trying to have something at least every three months,” she said. “We try to have something of interest for the local community. We have not done one of these. I can tell you, it’s going to be the place to be on that night.”

Chisum said the event will take place in the Danley Plaza, but the OCAC gallery will be open for the public to view.

“We are asking artists to bring new pieces in,” she said. “We are going to showcase all the new art that night and the completed renovations.”

Earlier this summer, the Dixon Foundation awarded the OCAC with a grant to renovate its facilities.

“We’ve cleared the walls, and we’re putting carpet from the ceiling to the floor for more art work,” Chisum said. “We are doing that throughout the dining area. It’s going to look amazing because we are going to have more space to hang the artwork.”

Among other improvements will be a newly painted gallery front and a new awning.

Tickets may be purchased from Chisum by calling 493-3811, at Southern Independent Bank, the Opp Chamber of Commerce and at the OCAC from 10 a.m. to 2 p.m. daily.