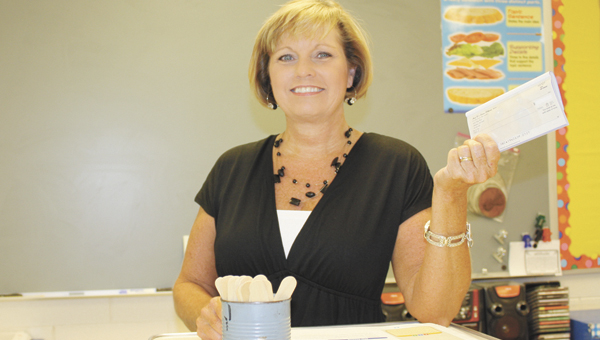 Dianne Chavers, shown inside her AES classroom, refused to say how much money she’s personally spent on classroom supplies. Like other teachers in the city system, she received a check or $200 for supplies yesterday.

Come Monday, Anna Johnson will begin her first official day on the job as a fifth grade teacher at Andalusia Elementary School. And without have ever receiving a paycheck, she’s already in the hole some $800.

Why? Because students aren’t the only ones who need school supplies.

For the last three years, there have been no state funds given to teachers to purchase classroom supplies such as copier paper, ink cartridges, pencils, pens or even books for classroom libraries. It’s also why school systems send out “suggested donation items” lists containing paper towels, hand sanitizer, Kleenex and the like at the beginning of the school year. There’s no extra money to purchase these items, ACS teachers said.

“Since this is my first year here, my room is blank,” said Johnson, who used the $800 she’s already spent to outfit her classroom. “I needed to buy everything. I needed and still need supplies, decorations, everything.”

But Tuesday, teachers in the Andalusia City School System got a “Christmas gift in August” in the form of a $200 stipend from the Andalusia Utilities Board.

“Wow is all I can say,” said first grade teacher Jackie Henderson, who likened the appropriation to a Christmas gift. “Of course, I’ve already spent way over that $200, but I can’t say thank you enough for the money.”

Like Johnson, Stephanie Nall is a first-time teacher at AES. Nall, a third grade teacher, said she’s spent between $700 and $800 on her classroom, purchasing the basics for the first day of school.

“I can’t tell because my husband would see it,” she said. “But I can tell you that money (the utilities board gave), that is a huge deal. We’re in our third year of having no money, and having to pay for everything out of pocket. Every penny counts, especially when you have only a few pennies.”

And teachers across the state have less money to spend on school supplies this year. That’s because the Legislature, seeking to stabilize the state employee retirement system, approved a big increase in the amount of money teachers are paying toward their retirement.

Teachers likened the change to a 2.5 percent reduction in salary.

“We’re not going to have our children do without in our classrooms,” Chavers said. “Things have to get done and you have to have the supplies to do it.”

Judy Bozeman, a special services professional for fourth and fifth graders, said she was “ecstatic” for the funds.

“Right now, I’d say I’m up to $600 out-of-pocket,” Bozeman said. “But it’s all worth it. Kudos to the utilities board for doing this for us. They don’t know what it means to us.”

What you need to know about World Series

Today, Wed., Aug. 3 Teams will begin arriving in Andalusia at approximately 3 p.m. Upon their arrival, the girls will... read more