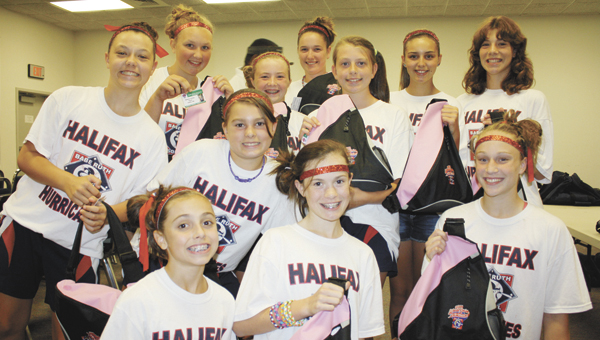 Members of the Halifax (Mass.) Hurricane team receive their goodie bags before heading to the hotel. | Stephanie Nelson/Star-News

There were squeals of delight as the girls arrived for the 12U Babe Ruth World Series Wednesday and opened their “goodie bags.”

First to arrive was the Hazlet Hawks of New Jersey. The girls said they’ve played together “since T-ball” and were ecstatic to make it to Andalusia after flying into Pensacola, Fla.

“This is an awesome experience,” said Sara Furch. “I can’t believe we’re here.”

“Look, dominoes,” exclaimed Ashley Marino. When asked if she could play, she replied, “A little.”

Next to arrive were the Halifax Hurricanes from Eastern Massachusetts. This group flew into Montgomery and arrived shortly before 3 p.m.

Other teams’ arrival times were staggered throughout the afternoon with the majority flying into either Pensacola or Montgomery. Some teams, like Florida, Brewton, East Brewton and Alex City, opted to travel by bus or personal vehicles.

Once they received their goodie bags and went through orientation, the girls settled into their hotel rooms.

At 9 a.m., teams and their families will be treated to a come-and-go event at Springdale, complete with a live presentation of Andalusia’s history.
At 11:30, they will attend a luncheon banquet at the Kiwanis Center, with guest speaker, Troy University’s softball coach Melanie Davis
The South Alabama team will take to the mound at 5:30 p.m. in the first game of the series.
Opening ceremonies are set for 7:30 p.m.
For a complete schedule of today’s games see Page 6.

Accused VictoryLand casino owner Milton McGregor’s attorney said in closing arguments of the bingo vote-buying trial that there “is a... read more