Economy down, library traffic up 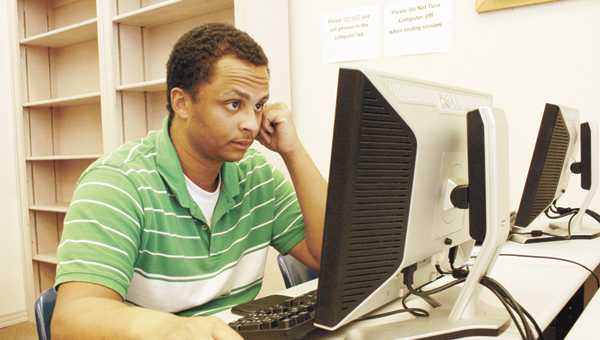 David Moody was at the APL this week using its computer lab.

With the uncertainty of the economy and higher-than normal unemployment rates, local public libraries are seeing an influx of patrons, while operating on smaller budgets.

The majority is using the service to create resumes and find jobs.

“We have so many people who come in and do resumes,” Taylor said. “You have to go online for many of today’s job applications. Some of them have never been on a computer. We help them with that.”

Additionally, Taylor said many residents come to the library to file for unemployment benefits online, while others use it for entertainment purposes.

“It stays so full in our computer lab,” she said.

Many residents also are taking advantage of APL’s collection of DVDs and audiobooks, she said.

Taylor said nearly 600 people use the library’s facilities each week.

OPL Director Gayle Claire said she’s seen an influx of people coming to the library to look for jobs.

“We have people who use our Microsoft Word program to create resumes,” she said. “We also have people reading our newspapers and magazines. People have dropped their subscriptions in this economy, and we have requests for other magazines all the time.”

Claire said the OPL sees an estimated 500 people in the library, depending on the week.

“We have a daily average of 85 people coming through here,” she said.

Despite the influx of patrons, all three directors said their state funding is down.

The libraries are funded through state allocations, funds from their respective cities and through grants from organizations such as the Dixon Foundation.

“Our state money has been cut back every year,” Claire said. “We’re back to 2005 funding levels.”

The City of Opp budgeted some $94,000 for the library department this year, which includes salaries, materials and supplies, insurance and utilities. The state allocation for OPL is $7,000.

Each library is responsible for those within the city limits and one-third of the county’s population. Since the CrossTrails organizations closed, each city library is accountable for a certain geographical area in the county for which to service.

“We have a really good friends group that works to fill in some of that,” she said.

Taylor said that the state allocation is approximately $7,000 from the state, and then they are primarily funded through the City of Andalusia, which budgets some $246,000 for the library.

“I also write grants to get more money,” she said.

Waldrop said the Florala Library receives $5,564 from the state and about $48,000 from the City of Florala, as well as donations from civic organizations such as Covington County’s United Fund.

“Of course, we wish we had more,” she said. “We just have to be budget conscious. I am maybe $2,000 less than what we’ve been getting from the state. We’re holding our own, but it’s tough to have that money and have it taken away. We do the best we can.”

The Circuit Clerk’s office will avoid cutting back on hours by eliminating two full-time positions. | File photo There will... read more