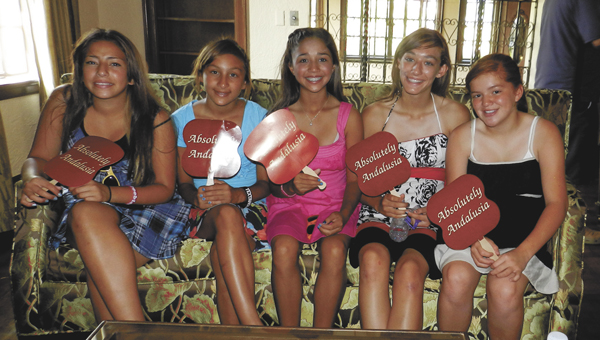 It’s not the heat, it’s the humidity! That’s what these young ladies from Othello, Wash., were saying as they made good use of hand-held fans during a welcome event at Springdale Thursday morning. Shown from left are Abigail Cantu, Lexy Garza, Linice DeLeon, Kirsten Quigley and Giselle Getzmaa.

Andalusia extended a warm, South Alabama welcome to its guests from all corners of the United States.

By 10 a.m. Thursday, members of the Othello, Wash., team, were melting, and making good use of hand-held fans distributed at the mostly-outdoor welcome event at Springdale.

“Our heat’s not like this,” they said. “This humidity!”

A quick check of Weather Channel stats at mid-day showed the difference. In Othello, the temperature was 82 and it felt like 81. In Andalusia, it was 99 and the heat index was pushing 110 degrees.

But the hospitality helped make up for the heat. At Springdale, the visitors were offered ice cold lemonade and sweet tea, along with an assortment of breakfast goodies.

By late in the day, Colleen Kirsey of Hazlet, N.J., was singing the praises of the South’s favorite beverage. And she even had a favorite brand: Milo’s.

The visitors also were served another Southern favorite, fried chicken, at the Luncheon of Champions. Other menu choices included grilled chicken, corn on the cob, mac and cheese, and fruit salad.

When Thursday night’s second games were delayed by lightning at about 10 p.m., the temperature was 87 and the heat index was 95. The visitors couldn’t have asked for a warmer welcome.

Economy down, library traffic up

David Moody was at the APL this week using its computer lab. With the uncertainty of the economy and higher-than... read more