Sports complex to be named for Mikel 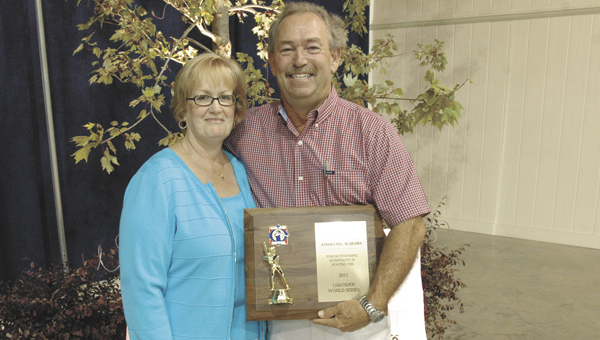 The never-at-a-loss-for-words Dwight Mikel, shown here with his wife, Babs, was speechless when Mayor Earl Johnson announced plans to name the sports complex for him.

Andalusia Mayor Earl Johnson made a special presentation for director of leisure services Dwight Mikel and Mikel’s wife, Babs, after the Luncheon of Champions on Thursday.

“This is a winner,” Johnson said. “Dwight’s a great leader in our community.

“That’s why during our next city council meeting, I’m going to make a proposal that we re-name the Andalusia Sports Complex the Dwight Mikel Sports Complex.”

Mikel received a plaque of recognition, and thanked everyone for all of their hard work after receiving a standing ovation from the crowd.

Earlier during the banquet, Mikel received another plaque from the Babe Ruth League commissioner Rob Connor for his efforts in the league.

It’s not the heat, it’s the humidity! That’s what these young ladies from Othello, Wash., were saying as they made... read more