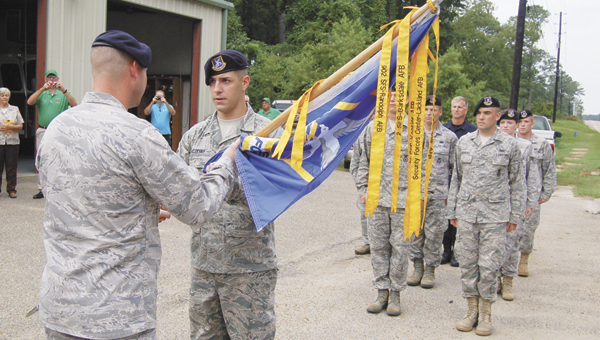 Step by step, groups from the Air Force’s security force are making a cross-country trip from San Antonio to Ground Zero in honor of those who lost their lives during the Sept. 11, 2011, terrorist attacks.

Airmen from Tyndall Air Force Base in Panama City, Fla., made a trek through Covington County on Thursday, stopping at the American Legion Post 157 in Gantt on their 146-mile journey from Gilberton to Brantley.

The ruck march began at the Security Forces center at Lackland Air Force Base Texas, and Air Force teams have divided the march into 15 portions.

On Friday, Airmen from Moody Air Force Base in Valdosta met the group at the Brantley Volunteer Fire Department to take over the march.

This group will walk 148 miles and will hand off a flag in Plains, Ga.

Lt. Robert Chance of the Tyndall group said that the group began their walk on Aug. 1, after relieving Hurlburt Field’s security forces teams.

The group’s goal was to cover at least 30 miles per day.

Throughout the run, local police and fire departments assisted the team by escorting them and giving them food and shelter.

Reel said they were welcomed at every stop.

Each airman has his or her own reasons for participating in the walk.

Technical Sgt. Nathan Spradley said the event raises awareness to honor and remember those who died in the Sept. 11 attacks, as well as those who have lost their lives fighting the war on terrorism.

“It is important to remember what happened 10 short years ago; people seem to have forgotten all too soon,” he said. “As an Iraq, Kuwait and Afghanistan veteran, this means a lot to me. I have lost friends to this war, and this helps to remember them and the legacy they left behind.”

Richard Throe, a security forces civilian member who was participating in the march, said, “I feel that anything we can do here at home to let all know we remember the lost and have not forgotten those still in the fight, is very important.

“I have served 10 years in the United States Air Force as a combat controller, and I have friends who are like brothers who have fought, are fighting and some who have lost their lives in this valiant effort.”

The men and women have braved the sweltering heat to honor those who have lost their lives in those attacks and the war on terrorism.

“It is hot out, however, you realize this isn’t just a security forces event,” Spradley said. “This is for those lost in the attacks on Sept. 11 and those who have since sacrificed defending our country’s freedom. When you stop and look at it like that, the heat isn’t so bad.”