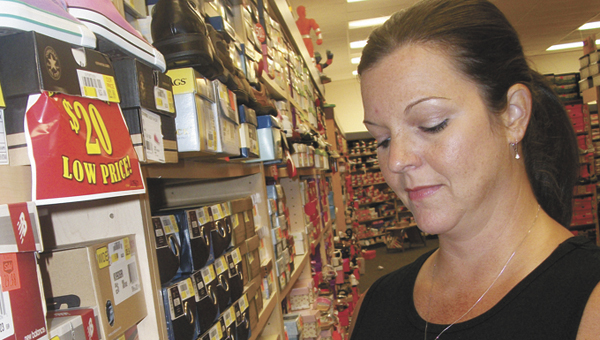 For local merchants, business is good on two fronts, with shoppers taking advantage of the annual tax-free shopping holiday happening this weekend, and an influx of shoppers in town for the 12U Babe Ruth Softball World Series.

Until midnight Sunday, all sales taxes will be waived on select purchases such as the majority of clothing items $100 or less; computers and computer supplies if costing no more than $750; and school supplies, such as notebooks, pens and paper, as long as the individual price is $50 or less.

“There wasn’t an early crowd, but in the afternoon, wow,” Walden said. “The World Series has been great for us, too. We’ve had a lot of out-of-town shoppers, especially the girls from New Jersey.”

She said the girls were taking advantage of the discounts on jeans, knit tops and shoes, where discounts ranged from an already 20 to 50 percent off to buy two, get one free.

The biggest crowd will be today, Walden said.

“I think that (today) is going be even better, and we’re going to get hit early,” she said.

At Burke’s, teams from New Jersey and Ohio were some of the best customers of the day, said supervisor Courtney Smart.

“Both are good for retail,” she said.