Time of their lives 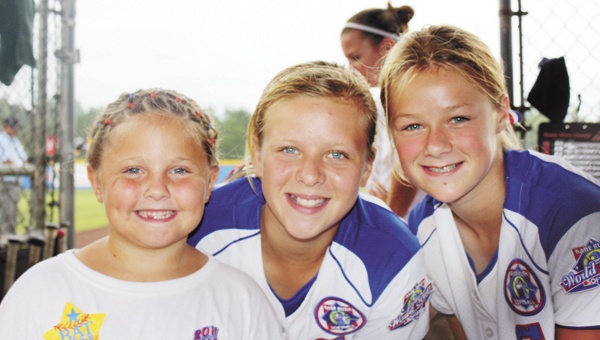 A group of lucky girls from Red Level, Andalusia and Opp has had the experience of a lifetime this past week after being chosen to be “bat girls” for visiting teams at the

“We got to get the bats, help them warm up, watch the pitchers throw balls – that kind of stuff,” said Arnett of the group’s official duties. Arnette is the daughter of Ricky and Kim Arnette and assisted the Fern Creek, Ky., team.

“If they missed the ball or someone hit it over the fence, we had to go get them, too.”

Ray, who is the daughter of Jamie and Heath Ray, was assigned to the Halifax, Mass., team.

Ray said her time was “not boring, ‘cause they weren’t shy. It was talk, talk, talk.”

Ray said her team was fascinated by boiled peanuts and air conditioning.

“They tried to eat them hull and everything,” she said of the peanuts. “Some of them liked them. Some spit them out.”

Heath Ray said the Massachusetts girls talked of how they didn’t have air conditioning in their schools or at home.

“Their 80 degrees is like our 60, they said,” he said. “They were a good group of people, and treated Sydney great.”

Wilkerson, who is the daughter of Scott and Melinda Wilkerson, was assigned to the New Jersey team.

“They were so nice to me,” she said. “I got to make handshakes with my friends, take pictures and sing some of their songs. The best part was they gave me a bag filled with school supplies and a jersey. It was fun to be with them.”

Kelley, the daughter of Jason and Sarah Kelley, worked with the Oviedo, Fla., team. She said she loved “pretty much everything about it.”

Except, of course, the heat.

“I just stand in front of the fan in the dugout when it gets too hot,” she said, while taking a brief break from her duties last night.

The majority of the “bat girls” said they also learned valuable playing skills while watching the teams compete.

“I got to learn how to stand to bunt,” Wilkerson said. “I even got to hit with them.”

Brooke Mancil, the daughter of Tonya and Jeff Mancil, was assigned to the Missouri team.

“I watched them,” she said. “I’m moving up to fast pitch next year.”

She said she was also treated to a host of treats from her team, including autographed T-shirts, helmets and photos.

“I had a great time,” she said of her experience.

Majors, who is the daughter of Jennifer and Mike Majors, assisted the Washington team. She said since their departure she’s had to forget about staying up late and hanging out.

“I’ll miss that,” she said. “They were the greatest team in town.”

Her friend Emma Capps was assigned to the California team. She is the daughter of Carrie and Darren Capps.

She said she felt “sophisticated” about being chosen for the honor of being a bat girl.

“But, the worst thing about being a bat girl is watching them leave,” she said. “I had to say goodbye and that was just so sad.”