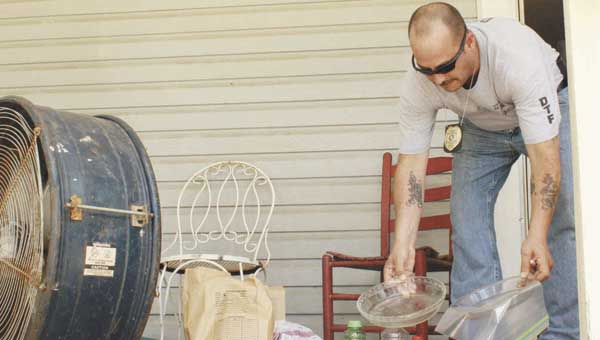 Roger Cender collects evidence from a meth lab found in Lockhart on Friday.

Five Lockhart residents were arrested and two children removed from the home after Drug Task Force agents located a meth lab in their Cherokee Street home.

DTF Commander Mark Odom said the “clandestine lab” was found after agents reportedly used undercover informants to purchase both meth and prescription pills from the home.

“(Friday) when they went to make a purchase, there was meth being produced in the home,” Odom said. “Once it was found, agents moved in and secured the residence until a search warrant could be obtained.”

While the search revealed the chemicals associated with making meth, Odom said it also revealed that two young children – a 19-month-old and a school-aged child – were living in the home.

Odom said that only the toddler was in the home when the arrests were made, and both children were removed to the Department of Human Resources’ custody and later turned over to other family members.

“It’s just a very sad situation,” he said. “When agents came in, there was a small child running around. Right where they were cooking the meth, there was baby bottles sitting right there. According to the (Drug Enforcement Agency), 75 percent of children brought up in a meth lab will test positive for meth.”

Arrested were Phillip McKinley, 23, and Chester McKinley Sr., 60, on two counts of distribution, first-degree manufacturing, chemical endangerment of a child; possession of drug paraphernalia and possession of a controlled substance and held on a $770,000 bond. The two were also out on bond for previous arrests for distribution.

Also arrested were Chester “Chet” McKinley Jr., 27; Kayla Sorrells, 21; and Terrie Owens, 44, on charges of first-degree manufacturing, chemical endangerment of a child; possession of drug paraphernalia and possession of a controlled substance and held on a $570,000 bond.

The DTF was assisted by the Lockhart and Florala police departments, as well as the Covington County Sheriff’s Office.