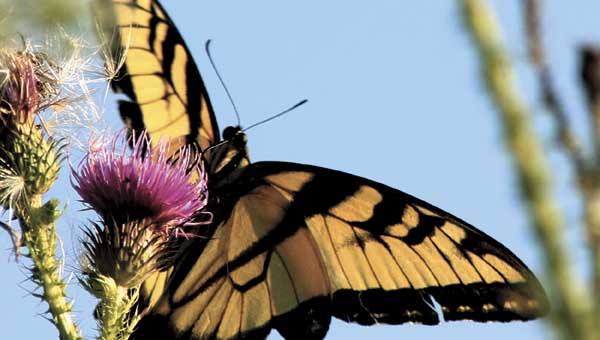 Everything you do matters.

The visit, which was the culmination of a back-to-school project orchestrated by AHS librarian Charlotte Spurlin, was designed to motivate and educate the students on how one’s actions define one’s life.

She said to do that, she could think of no better way than using Andrews’ book, “The Butterfly Effect,” which tells the tale of Joshua Chamberlain, a school teacher from Maine fighting in the Civil War, who made one move 150 years ago that positively impacted an entire nation. By charging the enemy without ammunition – and defeating them – Chamberlin set off a butterfly effect that lasts to this day.

Spurlin said her husband gave her a copy of the book last Christmas. After finishing, she loaned it to AHS principal Dr. Daniel Shakespeare.

“I did it as a means of encouragement, to remind him that he does make a difference,” Spurlin said. “After he read it, he told me he wanted every teacher, every student to read the book and to paper the school with butterflies to remind them of the fact that no matter how small, how seemingly insignificant, every action has a reaction, and each makes a difference.”

And that was only the beginning of the project. Spurlin called on friends to help make the butterflies that now dot the halls of AHS. Students read the book during the first week of class. Its message is now the theme for the school year.

On Monday, students heard how Andrews’ defining moment led him to where he is today. He told of how his parents died when he was 19; how he was homeless and sleeping in garages and under bridges; and about how he changed the direction of his life.

“My old friend Jones pushed me into a pool one day,” Andrews said. “I came up and said, ‘What’d you do that for?’ He said every day for the rest of your life someone is going to push you into the pool. It’s what you do after that that counts in life.

“That struck a chord in me,” he said.

Andrews said he began to focus on the question, “Are there choices one can make to direct the future?”

He found the answer in a library, after studying the history of more than 200 great men and women, and realizing there are seven common denominators they each had in common.

His answers came in his first two books, “The Seven Decisions” and later “The Traveler’s Gift,” a book which was simultaneously on the New York Times, Wall Street Journal, USA Today and Publisher’s Weekly’s best- seller lists. His other books, “The Noticer,” and “Return to Sawyertown,” follow the same theme – “noticing the little things that make a big difference in people’s lives.”

He spoke along those same lines to AHS students.

“We live in a society where everyone is concerned about feelings,” he said. “I’m going to let you in on a secret. Nobody really cares how you feel. They care about how you act.

“Every good thing that ever happens in your life – getting a new girlfriend or boyfriend or a new job – happens because of how you act,” he said.

“I’ll tell you something else,” he said. “Life is not fair, and it matters if people like us or not.

“I tell you, too, if you learn this skill, you will succeed in life,” he said. “It’s not a talent. It’s more important than earning all ‘As.’ Here it is – smile while you talk. Don’t carry around a cheesy grin. Just smile when you talk.

“If I smile, you smile,” he said. “Everything that happens after that is the butterfly effect.”

Fund set up for cancer patient

Ayla Powers (left) and her friend Rebecca Cory are shown. A local woman is fighting for her life after being... read more